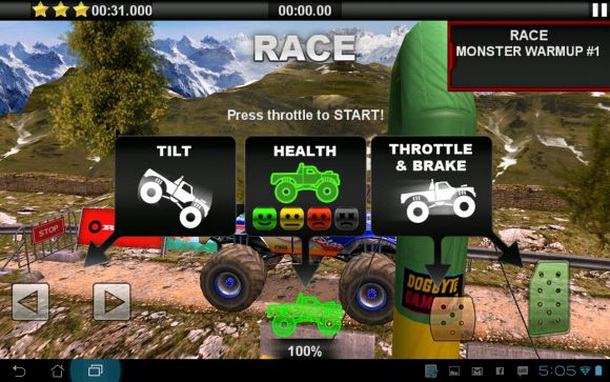 Developed by DogByte games, Offroad Legends has been downloaded more than a million times. The game takes up quite a bit of space on your phone, 79MB to be exact, with the latest version 1.2.0 so far. You need to have an Android phone with version 2.2 or higher. The game is free to download and has a rating of 4.6, out of 5 – according to 50,000 users so far!

The game is very easy to learn and you’ll be able to operate it right after you launch it. It is very basic, when you want to move the truck left, just tap left; when right, tap right – easy! You can also control whether you wish to lean the monster truck backward or forward. Thereby, you won’t flip over during the game. On the right side of the screen, you will find both throttle and break as well.

Practise makes perfect! Landing the monster truck will take some practise at first, but believe me, it is a lot of fun. There are no shortcuts, you basically learn through all of your failures. Just take note that if you continue to make wrong landings, the monster truck is bound to get damaged. If you end up losing the front wheels, there is no way you can get back to the game. You will have to restart Offroad Legends right from the beginning.

Once you complete tracks, you get rewards. You can get vehicle upgrades as well. As you progress through the game, the tracks will become more challenging, so upgrade your monster truck whenever you can. Some of these upgraded vehicles, come with awesome speed and power to make jumps that the previous truck could not have made. Overall, the advanced vehicles make the game easier for you.

Not all the upgrades in the game are meant for power or speed. On several occasions, I got the chance to play an additional bonus round, were I was required to navigate through a track. The track was different depending on the exact bonus round, but it was a relief considering the jumping and bouncing you need to do throughout the game.

Another type of bonus round I played, was driving a hot pink truck loaded with several boxes. I had to drive the truck up and down a crazy dirt trail to the end. The aim is to get to the finish line keeping all the boxes in one piece, and you have a time limit set to complete the task. Not as easy as it sounds!

After you complete the last track, the free version ends. To play additional levels, you need to buy points and obviously, you need real cash to do this. For an idea on how many different tracks are offered throughout the game, just browse through the menu.

Honestly though, I felt no need to make a purchase. The game is an awesome time waster, and the free version works well for me. I am still having fun playing the tracks available in the free version.

Check out Offroad Legends, download it now at Google Play!