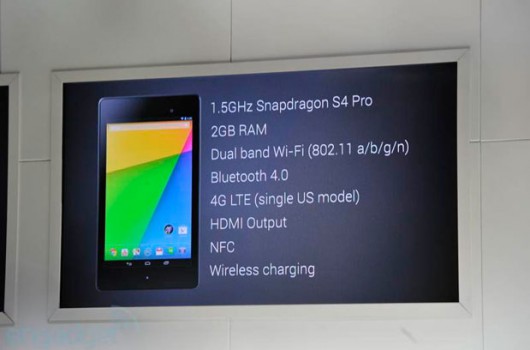 After dozens of rumors regarding the Next-Gen Nexus 7 tablet, Google has finally made the device official at a Breakfast event. We’ve been calling it the Nexus 7 2 or Nexus 2 7 for a while but Google stated that the tablet will be called, Nexus 7 replacing its predecessor. The new tablet also brings in the highly anticipated Android 4.3 as well. Google mentioned that they’re staying focused on the things that made the original tablet a success.

Display is not the only thing that has seen a bump in the new Nexus 7, Google has also increased the amount of RAM, it has been doubled, so the new Nexus 7 offers lightning fast multitasking with its 2GB of RAM. RAM is not the only thing to make it lightning fast, the CPU plays an important part as well. Google has included the Quad-Core SnapDragon S4 Pro CPU clocked at 1.5GHz with Adreno 320 GPU. The tablet comes in two flavor just like its predecessor, 16GB or 32GB and lacks a microSD card slot too. The new Nexus 7 also has the wireless charging built in.

Most of the leaked specs have been spot-on, the tablet sports a 5 megapixel rear shooter for the photographer in you with a 1.2 megapixel front facing camera for your video chatting needs. It also comes with standard connectivity features like Wi-Fi, NFC and Bluetooth 4.0. The tablet weighs in at around 11.2 ounces making it slightly lighter than its predecessor.

The battery life has also seen an improvement, as the company mentions the new Nexus 7 will offer up to 9 hours of seamless HD video playback and up to 10 hours of Internet browsing. The form-factor looks a bit like the original but feels more refined and polished. The soft touch backing is similar as the original tablet.

The specs are mouthwatering because of nearly everything has been bumped up but the price has seen a slight bump as well. The 16GB version of the new Nexus 7 is priced at $229.99, making it $30 more expensive than the original Nexus 7 but with all the new specs boost and extra features, the extra $30 is well worth it.

Many retailers have already started taking pre-orders for the tablet, $230 and $270 for 16GB and 32GB versions respectively. You can also get the new Nexus 7 directly from Google Play store when it launches on July 30.