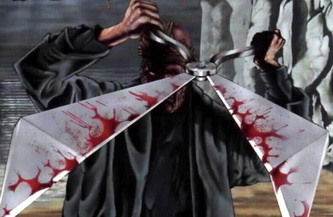 Story, ambiance, characters, and gameplay–four factors necessary for a good horror game. To achieve greatness, a horror game needs to combine all four into a unified experience. One that unsettles the player, instills a sense of urgency, creates immersion, pumps adrenaline, and causes conflict. A game that gives the player hope so that he or she may truly know despair. I wanted to list these factors in order of what should take top priority, but in my gaming experience I’ve noticed that among all of the greats–Alone in the Dark, Clock Tower, Silent Hill, Resident Evil (PlayStation era), Penumbra, F.E.A.R, Dead Space, Amnesia–these factors, while always present, shift in priority. So then, let’s get started as we take a closer look at horror games, and what about them makes us tick.

The story is the crux for me personally, as it defines why exactly I find myself in abandoned hospitals, haunted mansions, creepy warehouses, cursed castles and cities infested with evil. Note that a game can still frighten a player, myself included, without even having a storyline at all, but we’re talking about “great” horror games here. I’ll be frank in stating that if a horror game comes off with a particularly weak plot, then I’m most likely to spend a lot of my time asking, “who cares?” If it’s extra bad, I’ll begin to detach myself from the gameworld, making decisions with extremely little concern.

Get Jericho bad and I’ll just turn it off all together and play something else. I mentioned immersion earlier. Immersion is the sense that one has been pulled into the game’s world, and story can play a big part in this with a relatable premise, compelling plot, and chilling narrative. Among one of my favorite horror game premises has to be the original Silent Hill. It is essentially a man’s search for his daughter against unspeakable odds. There’s no chance to even ask, “who cares?”  There can be no detachment at this point, because such a premise plays on a player’s paternal/maternal instincts by forcing him/her to question what they’d do in such a situation. Even though I have no children myself, I can at least understand the kind of distress and urgency involved with a missing child–making this a relatable reason for why I’d walk into a spooky locale and continue on into the darkness.

Next up is ambiance, or the character and atmosphere of the gameworld. Take the classic horror set-up in which you arrive at a deserted mansion–let’s say you got separated from your friends outside in the woods during a nighttime thunderstorm. Already, without mentioning a haunting or creepy creatures, it might sound a bit spooky. Well what if I said that instead of a mansion it was a Walmart at high noon with clear skies? Right, you’re now scared for all of the reasons–I mean I don’t like going to Walmart either, but lets talk about what made the first example scary. A thunderstorm for example can force you to take shelter, in this case inside of a deserted mansion, and if the storm persists it can forge a feeling of entrapment. Snow can work in this way as well, and being alone creates a feeling of isolation. Since the mansion is deserted it would be completely silent except for the occasional crack of a thunderclap or the floorboards creaking underfoot, but any other sound is relatively unexplainable, and that’s what makes it scary. Your imagination begins to try to explain the uncanny, but all it can really do is hazard a guess–often for the worst. You think, “I don’t know what could happen next,” when in reality you know exactly what could happen next–and that’s everything. Properly done ambiance in a horror game throws the player into a situation in which he or she is robbed of any meaningful control outside of their own progression, and thus enters into a scenario with no limits.

Moving on, we have the characters. Everyday characters like Emily Hartwood and Harry Mason allow us to place ourselves more easily into the protagonist’s shoes. But what about the bad guys? Iconic baddies like Bobby Barrows (a.k.a The Scissorman) and Pyramid Head embody our fear in such a way that they live on even after we’ve parted ways with them. These two, and many like them, add greatly to a game’s sense of unease because they are nothing like us–or at least what we may perceive ourselves to be. They are relentless killers with no regard for human life whatsoever, and they appear to be seemingly unstoppable. Their looks lend to this, in that we struggle to understand what we are seeing, but when it breaks the established rules of what is “normal,” our rational thoughts give way to natural fear. Perhaps the most disturbing thing about The Scissorman for example is that while he is uncanny in appearance, wielding an over-sized pair of shears to slash and stab his victims after he hunts them down, he is actually a nine year old boy. A nine year old boy that greatly enjoys playing with and torturing his victims. *Shudders

Lastly we have gameplay, and here’s where it gets rough. Classically, horror games have been geared more towards running, hiding, outsmarting and surviving. The gameplay in modern horror titles, especially since Resident Evil 4, represents a shift towards more action (i.e. shooting, shooting, and shooting). Can we have more action in our horror games? Hell yeah; go check out the original F.E.A.R. They nailed the ambiance perfectly, and the story-line was even interesting! Dead Space also rocked out hardcore. The issue, however, is that with other action oriented horror games, it ceases to be a matter of, How do I get away? What do I do? When and where will I be safe? and more like, How many bullets is this going to take? Just gotta keep shooting. Cool–auto shotgun! Take Left 4 Dead for example. It’s very fun, tense, and frenetic, but just not very scary. Sudden loud noises and jump-out-scares aside, the fear is removed the instant you shoot and kill whatever was scaring you. The ambiance is at times undermined because you know exactly what’s coming next–something will jump out and you’re going to gun it down. There’s still fear in that you can die, but that really just depends on how well you shoot. You have some control now. There are limits defined by you, the player, and you have the ability to outright kill your fear.

In closing, great horror games will always take us away from what we know–what we find comfortable–and force us to move into the unknown. Whether alone or in a group, we’ll be helpless. There are no more heroes–just unstoppable killing machines and only one way out: forward.