A Look At The Classics: Star Fox 64 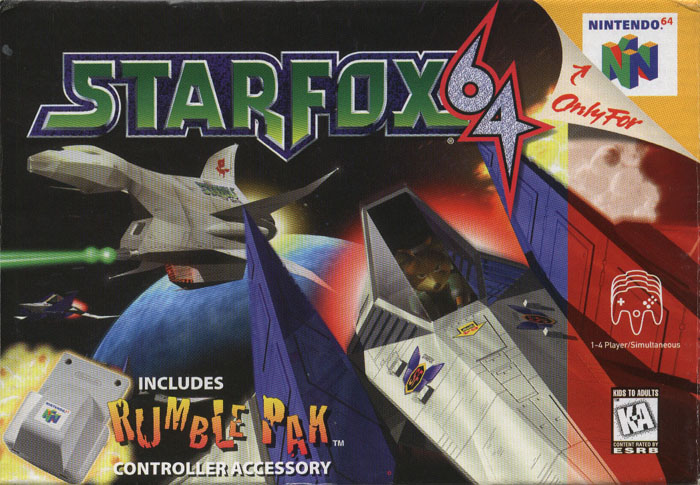 In 1997, Nintendo brought out the game StarFox 64. It was an instant classic because of the rail shooter nature of the game. You play as StarFox, a pilot and leader of the group, Team StarFox. They are asked by the leader of the Cornerian Military to help with their battle against the evil scientist Andross. The game is unique because their are many different paths that can be taken to the end of the game. Each stage can be completed or be a mission accomplished. This lets the player go for a harder game track or an easier track for fun. Is this 17 year old game still as fun as it was in 1997?

There is a reason why StarFox became a classic. It is a great game. When this game originally came out I played it over and over. I tried to get every single possible track unlocked. It took several years but eventually I managed to find all the hidden ways to get all the game paths open. The fact that Nintendo hide secret paths within the levels makes the game just a masterpiece in itself. But other parts, as well, make it one of the best games on the Nintendo 64.

One is a level that you have fly through a maze of boosters in an asteroid field. Then you get to go the planet of Katina. There, you take part in the Battle of Katina which is a direct reference to the 1996 Movie Independence Day. In the battle, you have to help the Air Force on Katina defeat one of Andross’s capital ships as it tries to destroy a major base of Katina. You have to destroy the core which will fire on the base once the laser was charged. You have to destroy the shields around the core, then use bombs and lasers, to destroy the core. The level ends with the ship crashing into ground just like in the end of Independence Day. Also, a great touch to the level is if you shoot down a large number of enemy fighters you will have more friendly fighters flying with you at the end level. Its a nice touch, that makes you laugh a little, because you know the guys at Nintendo saw Independence Day and thought it would make a great level in StarFox 64. So they put it into the game as a extra secret level.

While a playthrough of the game can be short, around 45 minutes to an hour, the multiple tracks that can be taken to beat the game gives it great replay value. Some of these tracks are really hard to get. One of them includes the mission on planet Macbeth. Here, you pilot a tank called the Landmaster instead of usual plane. You follow one of Andross’s supply trains and destroy it before it can deliver its supplies to Andross’s army. To get the mission accomplished, you have to shoot a bunch of switches along the train tracks. If you get all of them, you fight a giant butterfly mech. Once it is destroyed, the train cannot stop and the tracks change and sends the train crashing into a supply depot, causing it to explode a giant fireball. This level kicked my butt the first time I played it. It was the one that I played over and over trying to get the mission accomplished.
StarFox 64 is one of those games that everyone with an Nintendo 64 had. It was a game that could be easy if you wanted it to be or it could be a challenging run of levels that had your hands sweating. Whether you played it as a easy game or challenged yourself to beat the hardest track, this game will always be a classic. Why, because the game is full of fun moments, challenging levels and hidden jokes. Even after 17 years, StarFox 64 is still just as fun as it was in 1997.

Introducing The SCiO, The Closest Thing to a Tricorder That Kickstarter Has to Offer.