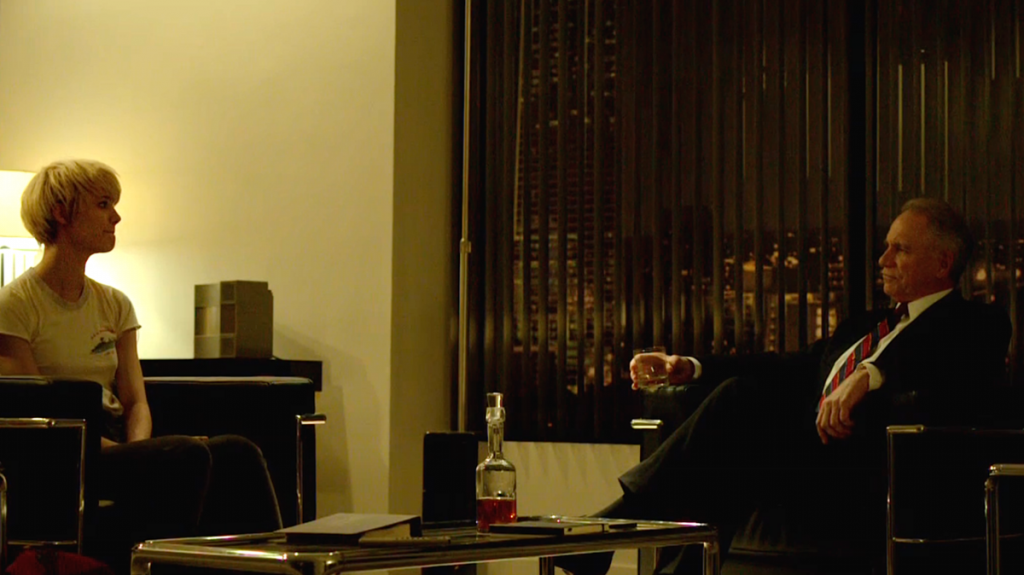 What Time Is It?

“Adventure” returns us to the harrowing tales of our band of Cardiff heroes as their project begins to take shape.  Though much of the focus landed on Joe and his tumbling realities, in many ways this episode shows just what’s at stake for the ensemble cast as far as what this venture may mean for their future, safely giving room for each character to be spotlighted.

Still bruised and battered because of earlier events, the visage of the consummate businessman that is Joe MacMillan continues to deteriorate with the advent of his father’s visit.  His father, played here by John Getz, seems to be the prototype of the MacMillan business family, at once powerful in voice, but also scrutinizing and conniving at the same time.  His time speaking with Cameron was interesting to behold in that for once, she almost went for the game he was spewing, and nearly falling for whatever phishing scheme Joe MacMillan, Sr. was conjuring in order to get at his estranged son.  Though shaken, Cameron was able to ward the older man away, but not before he was able to take with him a few souvenirs.

Gordon’s terrible relationship with alcohol abuse, which reared its head earlier this season, came back to haunt him in a big way this episode, leading to a blown deal with Kuzoku, a Japanese manufacturer,  with ties to his father-in-law’s company.  The meeting, for which he had set up himself, had actually gone quite well, with Gordon initially taking Joe’s advice from their last meeting to heart and staying quiet when he needs to be.  Unfortunately, he would have a few too many and over the course of a few drinks and some terribly timed comments on his part about his father-in-law’s company, he ended up destroying all the goodwill he had garnered.

Reeling from the realization that he may have cost both his company and his family pretty dearly, Gordon learned some new tricks for once, swallowing his pride and revealed, off-screen, the entire affair to his wife’s father.  The following day a sauntering Joe, having talked to the Japanese after the fact, had no idea of this side of Gordon and of his actions.  In the revelation that he was not the one to have fixed the situation triumphantly, but it was the humbled Gordon instead, MacMillan could only walk away with his misguided heroics.  This small victory played well for the often emotionally drained Gordon as their dynamic flipped for just this one scene.

Rage Against the Machine

In the programming department, it was great to see the addition of more programmers, as well as seeing Cameron contend with the newcomers.  First, what was once a solo effort on Cameron’s part, she now found herself a cog in the machine, struggling against the new lead engineer, who prescribed for the unit the industry standard for task completion.  Though the team was working by the book, Cam found it stifling and a waste in the talents involved, especially understanding whose assets could be better delegated.

Then as she usurped control of the software engineers by way of a text adventure, which was a fun determiner of who to keep on staff and who to give recommendation letters, it did seem to the casual observer that from Joe’s side it is a bit odd that a lot of what she is doing would be permissible.  Though this entire venture is high risk and taking chances would probably be needed here and there, allowing a good portion of his freshly hired staff to be chopped and excommunicated in this fashion still seems counterintuitive.

Additionally, time still feels to me an issue with this series, as following the last episode, it is to be surmised that they sent Cameron on vacation long enough to have hired a large amount of staff  and create a system under them to work under. The urgency for the characters to complete the project and put it out for sale, which should drive the tension of the show just isn’t hitting as well as the tension that drives the character interactions.  Considering how long this project may or may not be, a time stamp would really be appreciated at some point.

More and more the series is starting to show the decreasing control Joe has over his people as well as his mental focus as it seems that whatever went on in his supposed dark past that engendered such of his hate for IBM, seems to be slipping.  Though the team under him continues to meld together more and more, his image continues to crumble down and down with each episode and as the project’s finality looms, time can only tell how long Joe can hold his inner self from surfacing.