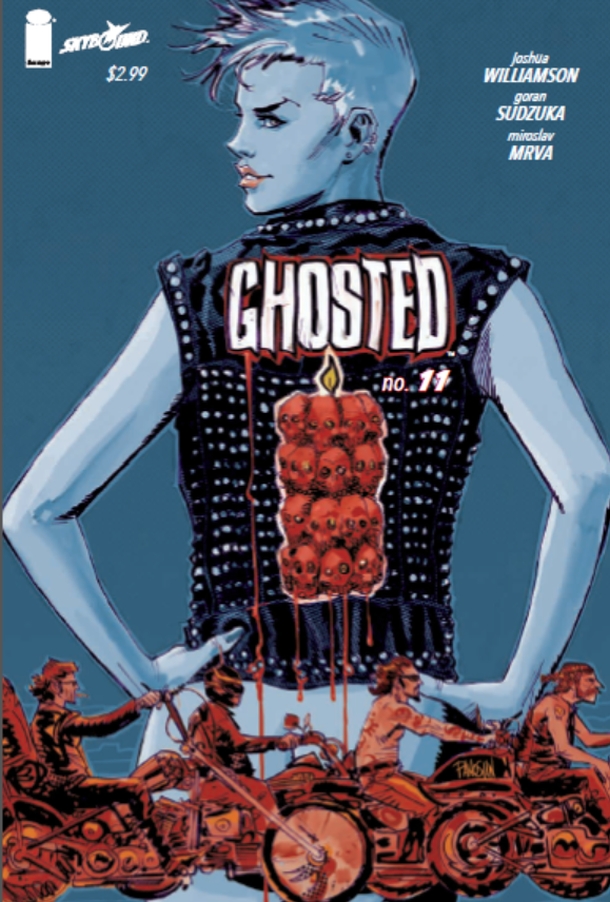 As you may have gathered from the excited ramblings that began this article, Issue 11 of Ghosted covers the backstory of Anderson. We met Anderson all the way back in Issue 1, when she blammed her way into the prison Jackson Winter’s was held in. She was the bodyguard of Marcus Schrecken. She and Winters had some fun times in the Trask mansion and they’ve been hanging out ever since.

And even though, over 10 Issues so far, we’ve all come to love and adore Anderson, her back story has been one of mystery. Until now.

It’s a tricky thing, I think, for a character’s backstory to be revealed, especially when the audience has already gotten to know them. With Anderson, the stakes are even higher. To say she’s closed down and a little frosty in the demeanour department is putting it lightly. A lesser story teller would lather on the bad memories, shove her into the box of ‘bad upbringing’ and tie it in a twisted bow of her life spiralling out of control. Joshua Williamson is not a lesser storyteller. He uses a much gentler touch and her story becomes all the darker for it.

This is, of course, complemented beautifully by Gordon Sudzuka. (WELCOME BACK, BUDDY, WE MISSED YOU!).

While the Blood Crow arc was handled quite well by Davide Gianfelice, I just love Sudzuka’s style and it’s so nice to have those beautiful pictures back. Especially, when peeking into the world of Anderson Lake. Especially when we get to see Anderson in some short-shorts…..

Being the lady-type person that I am, I probably take particular note of how females are drawn in comics and cartoons. The depictions of females in Geekdom hasn’t always been so fantastic, or realistic. To put it plainly, majority of the females look like they might at any moment crumble under the weight of the slight muscle tone the artists have bestowed upon them. In some cases, this works because “Oh, she’s a helpless female, wait no….She’s not, she has super mega powers of awesome”. But when it comes to a character like Anderson, who will in any given night scale a building and rip out one or two jugulars, I expect muscle tone.

Sudzuka does everything beautifully, but Anderson’s leg muscles are to die for. It had me seriously considering doing some squats or bends, or….Whatever it is they do in gyms. (I have no idea what they do in gyms, I assume it’s all very painful though). She is exquisite. Not because she’s super fit, though it’s impressive, but because how she looks fits with her character. Plus, she looks a little like Tank Girl and that’s never a bad thing.

(Is there such a thing as quad muscles? I have a feeling there should be.)