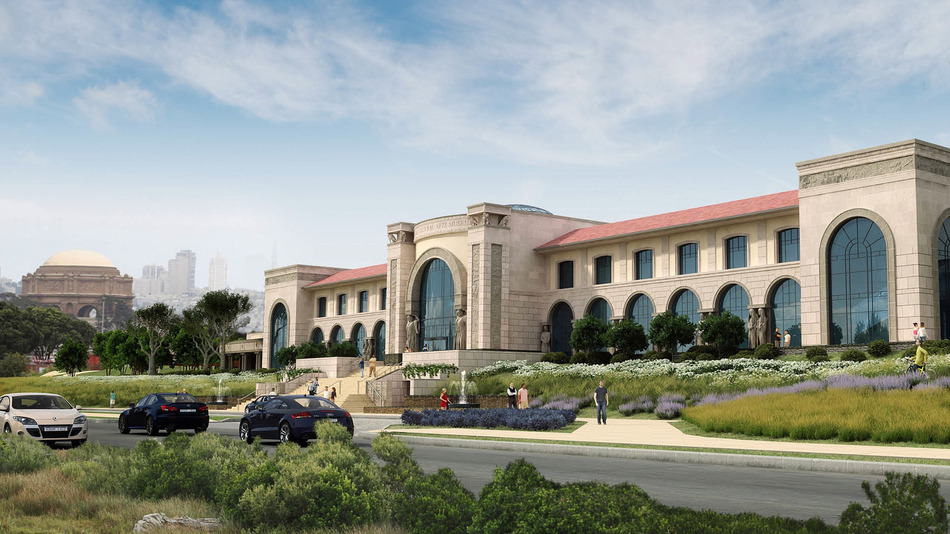 The Lucas Cultural Arts Museum hit a roadblock last month. George Lucas’ dream of building a museum dedicated to visual storytelling and the role art can play in young people’s lives is still but a dream. His is one of three proposals currently competing for the same space in the San Francisco Bay Area’s national park. Lucas had a good lead, with support from the mayor, but in a recent interview he let his impatience and anger at waiting leak out. Could this be the end of the road for his dream?

Shortly after selling Lucasfilm to Disney, good ol’ Georgie found something new to occupy his time. He decided to open an art museum in San Francisco, overlooking the Golden Gate Bridge, close to where he had his very first museum experience as a young child. The museum would display Lucas’ own collection of artistic works, over 1,000 pieces he has collected over the years, including a few by Norman Rockwell and Maxfield Parrish. He explains that his taste in artworks is not at all sophisticated, but more focused on a fun point of view. Lucas hopes the museum will inspire imagination, as many of the pieces lead to his own inspiration for the Star Wars films. He likes works that are emotional, and move the viewer to feel something different, whether that emotion be love, anger, happiness, or even laughter.

The artwork will not be the only reason to visit the museum, Lucas also hopes to have a large educational section for young people as well. There will be a focus on film creation, teaching the visitors about character creation, costumes, and how to design sets. Lucas was the forerunner in using digital art in movies for a long time, and now it is the norm. He wants to show the children of this generation just how much they can actually do with this medium. They can create their own movies or pictures at home, expressing their inner selves. He also hopes to teach people about the process of storytelling, and how there is nothing wrong with having idealistic, or even sentimental, thoughts. His dream is that this will be a family oriented museum, in which parents and children can interact together while learning about film or admiring the artwork.

The space Lucas wanted for his museum is currently occupied by a Sports Basement, but their lease will soon be up. According to Lucas, he was promised the space for his museum back in 2005 when he moved Lucasfilm into San Francisco’s national park, the Presidio, though the Trust claims this is false. He was forced to present his case to the Presidio Trust in San Francisco back in April, though they are not expected to come to a decision until this fall. Sixteen other projects were also competing for their right to the space, but for a while Lucas seemed to have the best hope. The Presidio is already hosting the Walt Disney Family Museum, and the home of Lucasfilm. Edwin M. Lee, the mayor of San Francisco, has also sanctioned the museum. Unfortunately, most people outside of the San Francisco (and worldwide geek) community are still unaware that this museum is even a possibility. Lucas urged people to “like” the Facebook page devoted to his museum’s idea, in order to show the Presidio that this would be a wise investment. To read the full proposal presented to the Presidio, click here.

Lucas has been growing antsy as the clock ticks, and has recently become somewhat aggressive towards the Presidio Trust. In his latest interview, he claimed they have been stalling his project since he first proposed the idea in 2009, and that they have also snubbed his taste in architecture. Lucas wanted a more historical atmosphere to the museum, and one of the Presidio’s chairwomen supposedly was very against this idea and wanted the museum to be more modern and new. Lucas said the Trust was making him jump through hoops, and that the competitors’ proposals were simply a “jar of jargon.” He attempted to threaten the Presidio staff and board by stating he would take his museum (and all the revenue it is expected to generate) elsewhere. He even went as far as to say the Trust members hated all the proposals (Lucas’ included) but the executive director ignored his comment.

Lucas will not look elsewhere in the San Francisco area, but instead will take his plans to Chicago. Mayor Rahm Emmanuel has already given Lucas the green light if the Presidio does not choose him. Emmanuel is a close friend of Lucas’ new wife, Mellody Hobson. Lucas is funding the museum himself, and since all of the artworks are from his own personal collection, he really just needs the space. It is estimated a building large enough to hold all of the works, even on a rotating exhibit basis, would take about three-years to build, so Lucas was hoping to just set up shop in a pre-existing space (like the Presidio). We shall all have to wait and see which proposal the Presidio Trust ends up choosing.