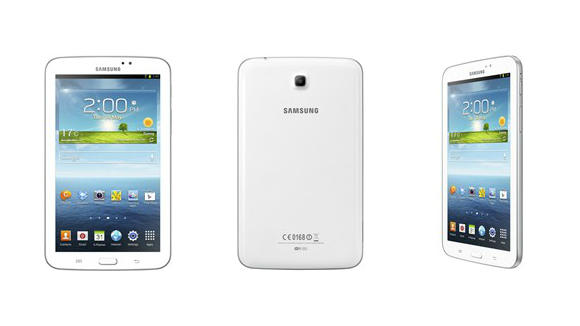 Samsung has just announced its latest 7-inch tablet known as the Galaxy Tab 3. Looks like Samsung is getting ready to compete with budget Android tablets like the Nexus 7.

According to the press release, the new Galaxy Tab 3 will come with a 1.2GHz Dual-Core processor under the hood, 7-inch WSVGA display with standard 1024 x 600p resolution, 1GB of RAM and it will have 8GB or 16GB of internal storage depending on the version you choose. In addition, it also sports a microSD card if you exhaust the internal memory. The Galaxy Tab 3 also includes a 3 megapixel rear shooter and 1.3 megapixel front facing camera for your video chatting needs.

Samsung has announced two versions of the Galaxy Tab 3, a Wi-Fi only version and a 3G version. No support for LTE sadly.

Samsung has stated that the Wi-Fi only version will be shipped worldwide in beginning of May, while the 3G version will hit the shelves sometime in June. The press release also denotes that “product availability varies by market and will be rolled out gradually.”, So, this means that either variant will only be available in select markets.

The Galaxy Tab 3 will ship with the outdated Android 4.1 Jelly Bean OS with Samsung’s enhanced user experience. We’re certain that it will be updated to Android 4.2 sometime in the future. According to the company, the Galaxy Tab 3 has a much more thinner bezel and it will make the tablet more portable than its predecessor.

Galaxy Tab 3: Price should be right.

The Galaxy Tab 3 ditches the old design as seen on previous Galaxy Tabs and sports a new look that is similar to the Galaxy S4’s style. There are no words on the pricing of the Galaxy Tab 3 yet but we’re assuming it will be priced according to the competition. Both 16GB Nexus 7 and Kindle Fire HD are priced at $199. So, if Samsung is planning to compete with these tablets then it will have to price the Galaxy Tab 3 within that price range. With the recent launch of HP Slate 7 with a price tag of just $169, the tablet market has gotten even more tougher than before. Samsung will have to make sure that the new Galaxy Tab 3 is priced reasonably and is worth each buck.

Which tablet would you choose within $200 price point? Shoot us a comment below.