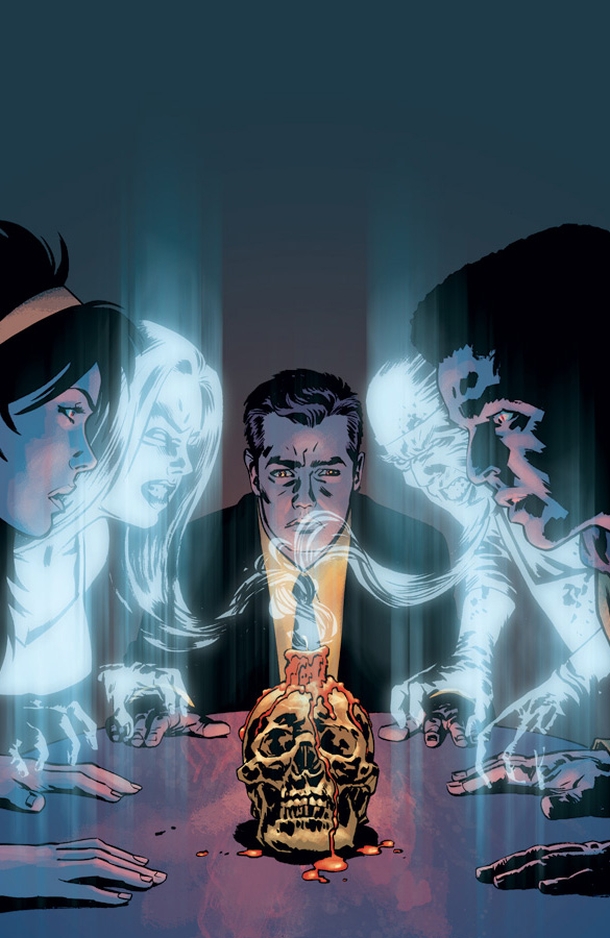 I don’t want to say you’re out of a job, but I will say that as a term used to describe a tumultuous emotional reaction to a series of events real or imagined, you are about to be replaced by the word- ‘Ghosted’.

Winters, our main man, is really growing into his character. If Don Draper and Sterling Archer had a baby, it would be Jackson Winters. Up until this issue, he’s been a stock standard smooth operator of his crew of con men and women. But issue 3 shows us that there’s a little more to Winters than we previously thought. He’s not just outstandingly cool, there’s an edge of cold to him now. It feels like they’ve started to flesh out him out, to make him more than just the caricature.

Of course, they don’t need to flesh out Jackson Winters. He’s fine as the two dimensional character. But then, there’s so many things that don’t need to be done in this issue, or even the series, that they go ahead and do anyway. That’s what is making this a thoroughly enjoyable read.

The artwork in this issue, even more so than the other two, demands that you pay attention to it . The devil has been in the detail before now, but I think he got bored and is has taken to oozing out of the woodwork. Gordon Sudzuka and Miroslav Mrva have done a beautiful job of creating a cinematic experience, with static images. The overlay of words on images (lettering done by Rus Wooton) is perfectly crafted. And….the writing itself? Joshua Williamson is truly out doing himself. But my favourite part of the entire issue- Where a character doesn’t seem to be saying anything at all. (And you thought that was going to be a spoiler, but it wasn’t!)

It’s becoming increasingly difficult to find something I don’t like about this series. I suspect, it’s because with this team, they’ve found the perfect balance of skill sets and abilities. It’s artwork in action. As long as you’re okay with bloody artwork that features ghosts and a little nudity.

The twists are perfectly shaped so that by the end of the issue, you can see the story disappearing around a corner and you’ve got no idea what will happen until you catch up to it. What would be a real twist, is if an episode of Ghosted had no twists. I’d like to say that nothing in this series can surprise me now, but I just know that issue 4 will prove me wrong.

The only thing that is troubling, at this point, is that the story is moving very fast. It’s put together well, but I don’t know for how long it can keep up the pace, while maintaining high quality intense moments. It feels like it’s all ramping up for a bitter disappointment. Yes, issue 3 is well worth your money. But after the impression that the first issue of Ghosted made, I kind of feel like every issue is a step closer to eventual disappointment. I worry that they won’t be able to pull this off, that they’ll tie themselves into a knot with the story, or run out of steam right at the end. I want to be wrong.

Parental/kiddy warning at this point- There is at least one shot of a naked breast in passing and the language is still pretty rich. The comics are fast paced and as such, the blood runs freely and quickly in this issue as in any other so far of Ghosted.

Ghosted #3 was a solid addition to what is shaping up to be one hell of a ride. It’s out now, so you should pick it up.
3 out of 5 shivers down your spine.