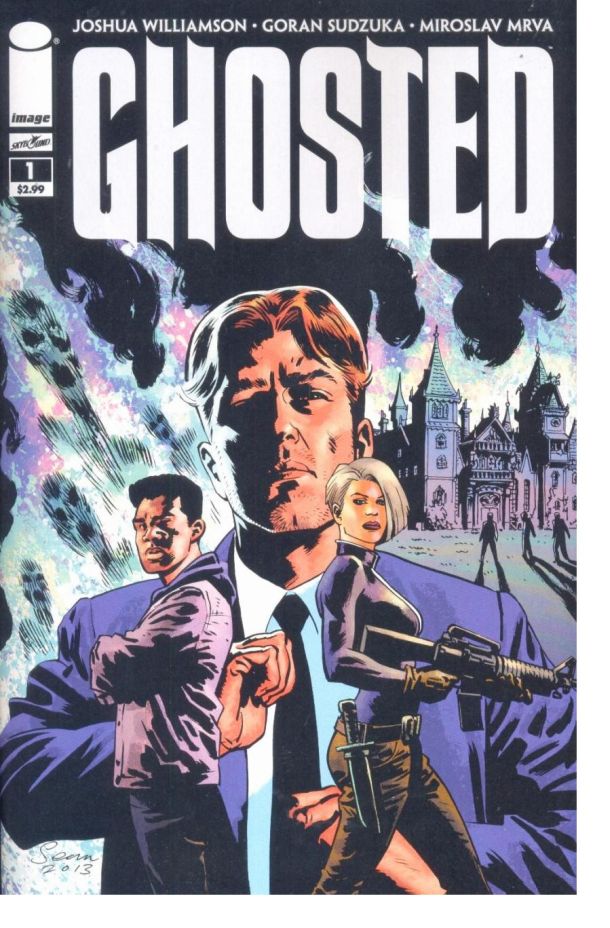 It’s a series that if you haven’t heard of it yet, you’re about to. Ghosted is like if a guy like “Archer” and Ghostbusters had a baby. A baby in the form of a comic book.

For the kids just joining us on this ‘Ghosted’ train, I’m going to try and keep this as spoiler free as possible. But, unfortunately, the first issue pretty much outlines what will be the basic plot for the entire series…..So….. If you want to be suitably surprised at what goes on in the first issue, if you like the cover art on the first issue, if you’ve already decided you’ll buy it because the Ghosted #2 sold out, then don’t read any further. Just go and buy it already. I think you’ll be pleased with the investment.

Not going to lie, this isn’t the kind of artwork that draws me in. It’s not to say it’s bad artwork, but it feels very old skool, especially for something that contains so much blood. If there’s going to be a lot of blood (Oh and there is a LOT of blood), I like it to be vibrant. But it’s not.

Still, if you’re a fan of the moody colouring/shading/overall artwork of The Witching Hour this is the sort of thing that should fall into the ‘visually appealing’ category for you. (Personally, I loved The Witching Hour, in large part because the artwork was not the kind I usually like, but was done so well that I couldn’t help but be impressed by it).

If you’re one of those people who can’t draw stick figures, so their frustration manifests itself as a highly critical nature when it comes to art (ahem, like me), then you may not enjoy the visual aspects of Ghosted. But if you let that stop you from reading the first issue, then you’re making a dire mistake.

It’s probably not a spoiler to just tell you the premise of what looks to be the entire series. But, as I went into the first Ghosted not knowing anything about it, other than it might be about ghosts and people with guns, discovering the story was a lot of fun.

We open on a rather disturbing prison scenes, that make up the daily grind of the main character- Jackson T. Winters. Have you seen Oz? Yeah, it’s like that, but in comic book.

Big badda boom! A ‘Dr Blight’ looking lady with a gun breaks him out (her name is Anderson Lake, exactly how cool is that name?!) and takes him to her boss, who tells Winters he has exactly two choices in life-

-Steal a ghost from a mansion that was owned by a family scarier than the Addam’s family.

-Go back to prison.

Obviously, Winters decides that he was sick of prison anyway.

Cue: Every ‘crook doing a job’ scene ever. It’s like Ocean’s 11, but a little less classy because they say swear words. We’re introduced to the team he insists on choosing, (because they always insist on their own team) along with a psychic chosen by Schreken (because there’s always at least one that the boss insists on).

The psychic is there to find the ghost, that Winters is meant to be stealing.

The ghost that Winters doesn’t think exists in the first place.

Everything about this comic smacks of stereotypes, from the haircuts to the use of foul language. Even the art in the comic is what people who don’t know anything about comics, expect to see in comics.

And yet…. I really enjoyed Ghosted #1, despite not expecting to at all.

It should have turned me off. But there is something in the writing, even in the artwork, that hints at there being bigger things at play that just another foul mouthed comic to read. They’re not stingy with the pages either. I would expect, in a comic book like this, for everything to get drawn out and for the twists to become huge curving detours.

Instead, they use the space to set the groundwork for number 2 in a very clever way. The best touch, of course, is the end page. The final page blew me away because while I was expecting something like that, I wasn’t expecting it quite so soon.

The end page is diabolically enticing. I couldn’t love it enough.