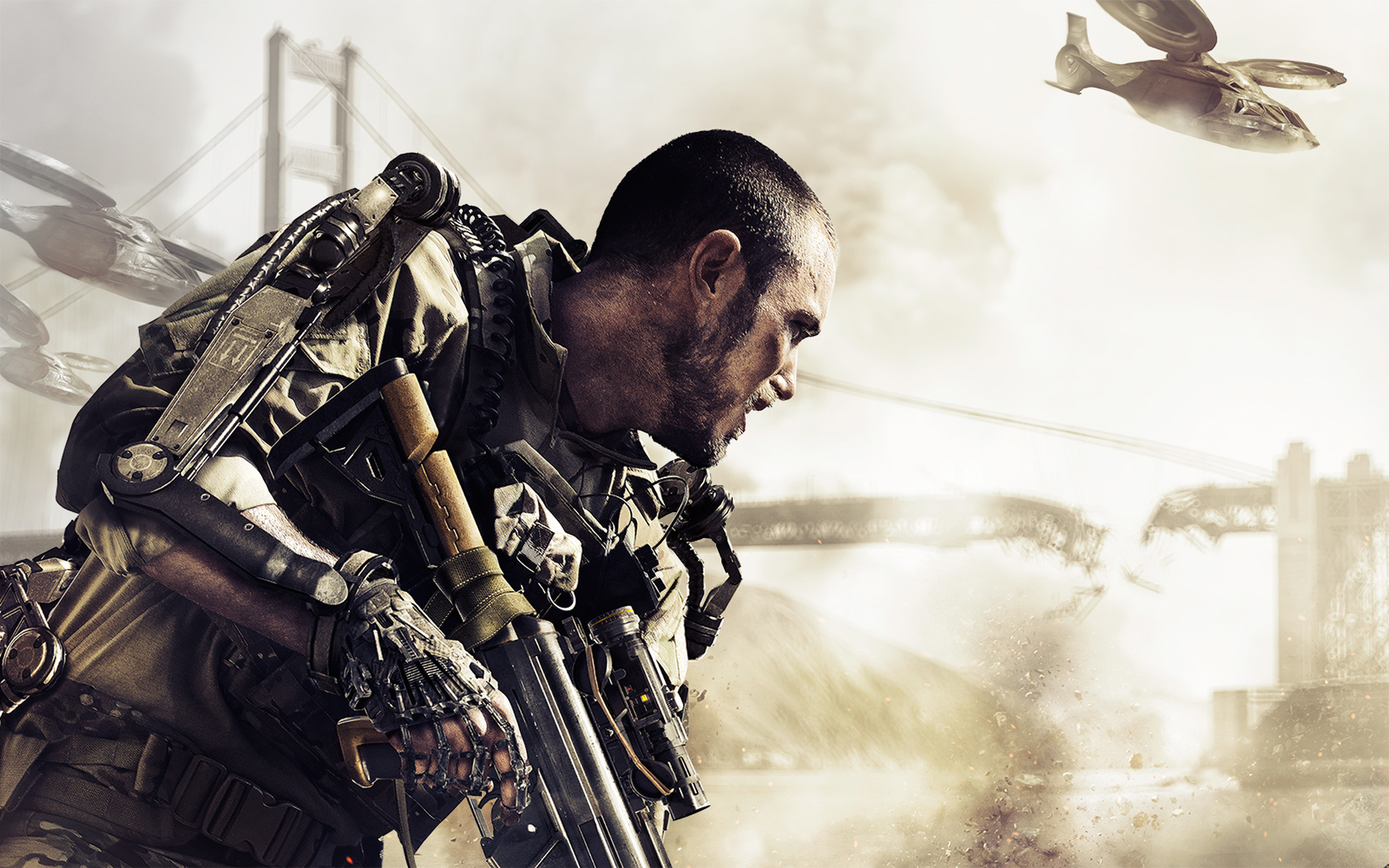 Today, the famous Call of Duty series has it’s next instalment’s multiplayer feature been given a reveal trailer. If you haven’ seen it yet, you can check it out here, go ahead and watch it above. There was also a livestream from the games Gamescon press reveal of the trailer, that pretty much summed up the new stuff, showed us it in detail, showed some maps etc. and so I thought I’d give my opinion on it, as a yearly CoD player. Basically, what has happened is that rather than going in the usual two year cycle of Infinity Ward then Treyarch, they have included a third development team, Sledgehammer Games. This is the first instalment from their team, which means they have a lot to show. It also means that each team now has three years each to work in their games, so hopefully they will be better and break the communities opinion that the games simply aren’t changing year to year. With that being said, Sledgehammer has bought a lot to the multiplayer FPS trailer. By that I mean, they have used some pre-existing features in other games, and thought of a few new things, and thrown it all into the new CoD. What we have is an abundance of features aimed to make the game more like the fast paced shooter that we have grown to love. It has also tried to fight another of its problems, that being that people get bored because the only customisability is from microtransactions and the only reward after hitting max level is that you are max level.

he first big change is the exoskeletons that make up a big part of the story. These have been implemented into the multiplayer with the aim to add more movement and pace to the game. Basically, it gives you the ability to double jump, to dash in the air, to do all kinds of movements in all directions. That makes manoeuvring maps a lot easier and a lot more fun. Then, they have brought in abilities that fit in with the exoskeletons, abilities the user can chose to fit his play style (E.G. hover, cloak, shield etc.).  They have also put in that all grenades (including some new ones) will fire from the suit but that isn’t really a new thing from the suit, its more just something added to make it feel “cooler”. What this means is that it will be a more fast paced game. People will be flying about, jumping out the way of bullets, just making it harder to kill and opening up more chances for players with skill to outplay the opponent with movement rather than just lying on the ground, or “drop shotting”.  This should help to bring it back into a Call of Duty game, rather than a slow paced, dull FPS.

Secondly, to help with customizability, they have put in a feature similar to Battlefield 4. You get drops at the ends of games for completing challenges, sometimes just randomly, that kind of thing. These drops are weapons crate style things, known as “Supply Drops” that give you not only new items for your character (yes, you can now fully customize the appearance of your character), but also guns with camos and attribute changes. Big change. These drop items in three different rarity categories, and look pretty cool. The problem is, if they turn into BF4 style where you can buy them, that is a big no no. IF there was a market to trade them on, that would be cool too.

They are also bringing back the point system of loadout customisation. However, rather than the Black Ops 2 style ten points, it is now thirteen because it has added scorestreaks (yes they are back) as one of the options, meaning if you run no scorestreaks, you can have more weapon attachments or perks (they have the wildcards) and you can wildcard your scorestreaks to have four! Also, in a weird twist, you have perks for your exoskeletons and the ability to customise the scorestreaks. By adding things to them, you can make them cost more points, for example you can have a controllable turret, replace bullets with rockets to make it 100 points more, then add the ability to rip the turret off the stand to make it another 100 points more. This means you have to get a higher score to get it, but once you have got it it will be more powerful. Too strong? Maybe, but good, definitely.

The maps look better too, with more features, more moving things and level specific features (exploding chemical canisters on a moving rail, turrets rising from the ground). One even has the “levolution” style thing, but rather than player activated, at a certain time a giant wave will come and change the map kind of thing. Pretty neat. So far, we have only seen four of the maps though, and all look nice. There is also some new gamemodes, with a oddball style game, the return of Hard Point and a new version of the Call of Duty; World at War favourite, War! All of this is promising to be good, and from people who have had a chance to play the game seems good, looks promising. If they do the new stuff they’re adding right, it will be incredibly good. However, it will be easy to make mistakes or chose the wrong path, but I think we can all hope that Sledgehammer are going to do the right thing.

What do you think? Are these changes good or just a bunch of random things thrown in to try and save the series? Leave a comment below!

Patrick is a Sixth Form student who has a passion for gaming and technology. He also enjoys writing, in particular articles on his passions. He spends a lot of his time either playing games or nerding out over new technology. He also wants to become a game developer some day.