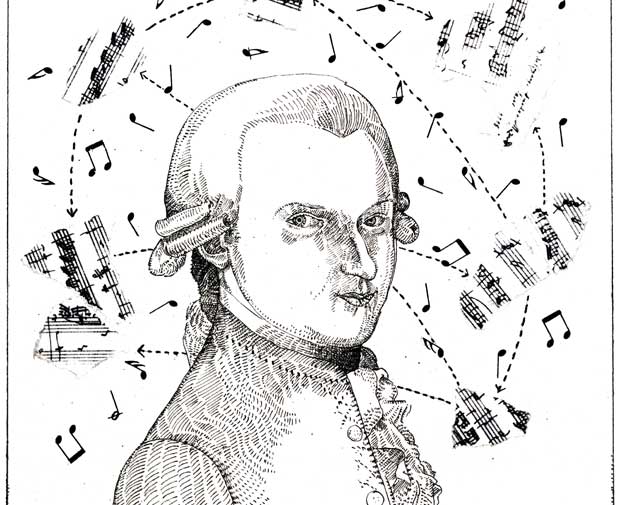 There’s absolutely one thing a nerd cannot resist: math. Derivatives, y-intercepts and horizontal asymptotes are, just to name a few,  characteristics of the beloved subject that some may find dreadful, tedious, and even more difficult than life itself. Although, is it possible to compare mathematics side by side with something that is, seemingly, on the other end of the subject spectrum? That’s right: music. Technically speaking, there would be no music theory if it were not for the language of mathematics?

Did you know that those who play instruments can solve more complex mathematical equations and perform operations more efficiently than others? This is due to their keen sense of detail, abundance of discipline and habitual nature of practicing their skill repeatedly until perfection is achieved. These preparation routines are, too, necessary for constructing stable math skills.

The “Mozart Effect”, which reached its peak of popularity around the early 1990s, is when an individual or group of individuals listen to music composed by Mozart and proceed to perform spatial-temporal cognition designated tasks, such as piecing together Legos to build a miniature replica of the Titanic, more effortlessly than before. In 1993, Elizabeth Rauscher, former researcher at NASA, physicist and parapsychologist, revealed that after listening to Mozart for about ten minutes one’s IQ shall increase significantly by 8 to 9 points.

Reading music is, similarly, like reading mathematical symbols. Whether it would be a treble or bass clef, every measure is divided into beats, which are divisions of time, mathematically speaking, of course. When reading music, next to the clefs, will always be a time signature; a time signature represents the length of the melody in a song and is typically written as a fraction. The number on bottom, generally known in mathematics as the denominator, tells the musician which note in the piece gets a count, while the top number, known mathematically as the numerator, signifies how many notes are in a measure.

Fibonacci sequences are very popular amongst mathematicians, more specifically aimed at calculus lovers, and is where the first two terms are added together to create the next term, the second number and the term created are added together to create the next term, and so on and so forth (i.e. 1,1,2,3,5,8,etc.). This sequence can go on infinitely. Although, in music theory, Fibonacci numbers are what music scales are based upon. A scale is, customarily, composed of 8 notes, where the 3rd and 5th note serve as the foundation, similar to the mathematical sequences.

Fun Fact: Did you know that the primary band used to uncover more about the relationship between math and music are The Beatles? Professors from various universities are attempting to use math to decode songs such as “A Hard Day’s Night” and “Strawberry Fields Forever” due to their differentiating sounds in comparison to other living artists.