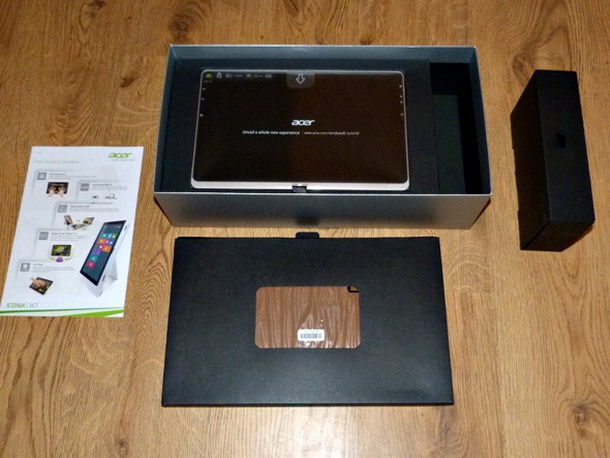 Acer Iconia W7 Windows 8 Tablet PC is slim, sleek and sexy. You might think it only runs on Windows 8 RT only, but it actually comes with Core i3 CPU, 64GB SSD, and 4GB RAM. It also supports Microsoft’s latest Operating System.

I won’t say that the Tablet PC is perfect, it does have a few faults whether in design or execution. But, it is still an impressive machine and I will give you the reasons why.

Overview and Specs – Out of the Box

Similar to a brand new mobile phone, the various components are boxed and wrapped separately, after buying this tablet. You will find a docking station, HDMI adaptor, main power supply, Bluetooth keyboard, docking station stand, faux leather tablet case and recovery disks (You will need an external DVD-ROM drive for putting these to use). The tablet also comes with a cleaning cloth for the display, and a quick start guide. The guide is pretty easy to understand, and you should be good to go within a couple of hours.

There are several versions of W7 that have been released so far. This review features the Core i3 Model that has Windows 8 pre-installed. Other models include, Windows 8 Professional and a Core i5 model with larger SSD, and a choice between the two versions of Windows 8. The price is between $799 and $999 depending on the exact version.

The graphics are output from an Intel HD 3000 to a 11.6 inch display. The maximum resolution is 1920×1080 pixels. The display is equipped with a wide viewing angle, making this tablet amazing for group collaboration and viewing videos as well.

The front face camera is 5MP and comes with an HD camcorder combination & the capacitive, multi-touch display. There are USB 3.0 ports available as well. When it comes to the audio system, there is a built-in Dolby Home Theater v4 Sound Enhancement. Dolby 5.1 or 7.1 cinematic surround is available as well through the audio out port in the right hand side of the tablet. The on board speakers are pretty small, but still very good. 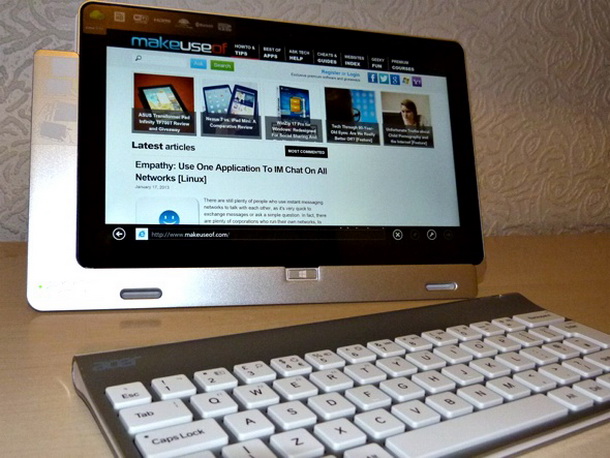 The tablet can be docked very easily, and it can be docked in various configurations as well. The matte finish is sort of old school, but it still looks pretty cool. Personally, the tablet scores pretty high, and its been a long time since I’ve seen such a good looking tablet. Just a quick word of warning though, if you use a leather case for this tablet, the heat generated by the battery can result into some unpleasant odors – if you get what I mean.

Windows 8 works extremely well on the tablet. I personally don’t know of any other tablet that’s more equipped to run this new operating system. My experience of working on the tablet has been almost seamless so far.

The different Acer applications that are included right from the start in this tablet are:

It’s easy to use, mainly because of the 10-point touch display. The device is fast and responsive (It resumes from standby within a second and does not take more than 6 seconds to boot either).

I liked Acer Iconia W7 Windows 8 Tablet PC, and I think its a good device, with suitable features.

Facebook Reportedly Working on Homescreen Feature, Not a Phone

Restore your Filament with Just a Push of...

Upgrade Your Work Computer without Spending A Fortune

The Value of Kernel Processors

The Beginner’s Guide to Building Your Own PC