Here’s how it works. You send Vinyl Me, Please some of your hard-earned money (a three month plan will run you just $81) and they send you one carefully selected album they feel is an Essential addition to any record collection. Easy, right? Each custom pressing (often on colored vinyl!) also comes with killer special features like original artwork, informative booklets, and even a recipe for a companion cocktail. You’ll have membership privileges in the VMP shop too, which means you can grab a copy of previous VMP selections from the archives – including January’s beauteous reissue of Dirty Projector’s breakthrough album Bitte Orca – not to mention a bevy of rare releases pressed exclusively for the folks at Vinyl Me, Please. The store is open, and Team VMP are dropping fresh new selections to their stock every single week. Do not miss out.

What’s in the box for February, you ask? How about another stunning reissue of a timeless classic from the Queen of Soul. Get ready to get down to Aretha Franklin’s Aretha Now. 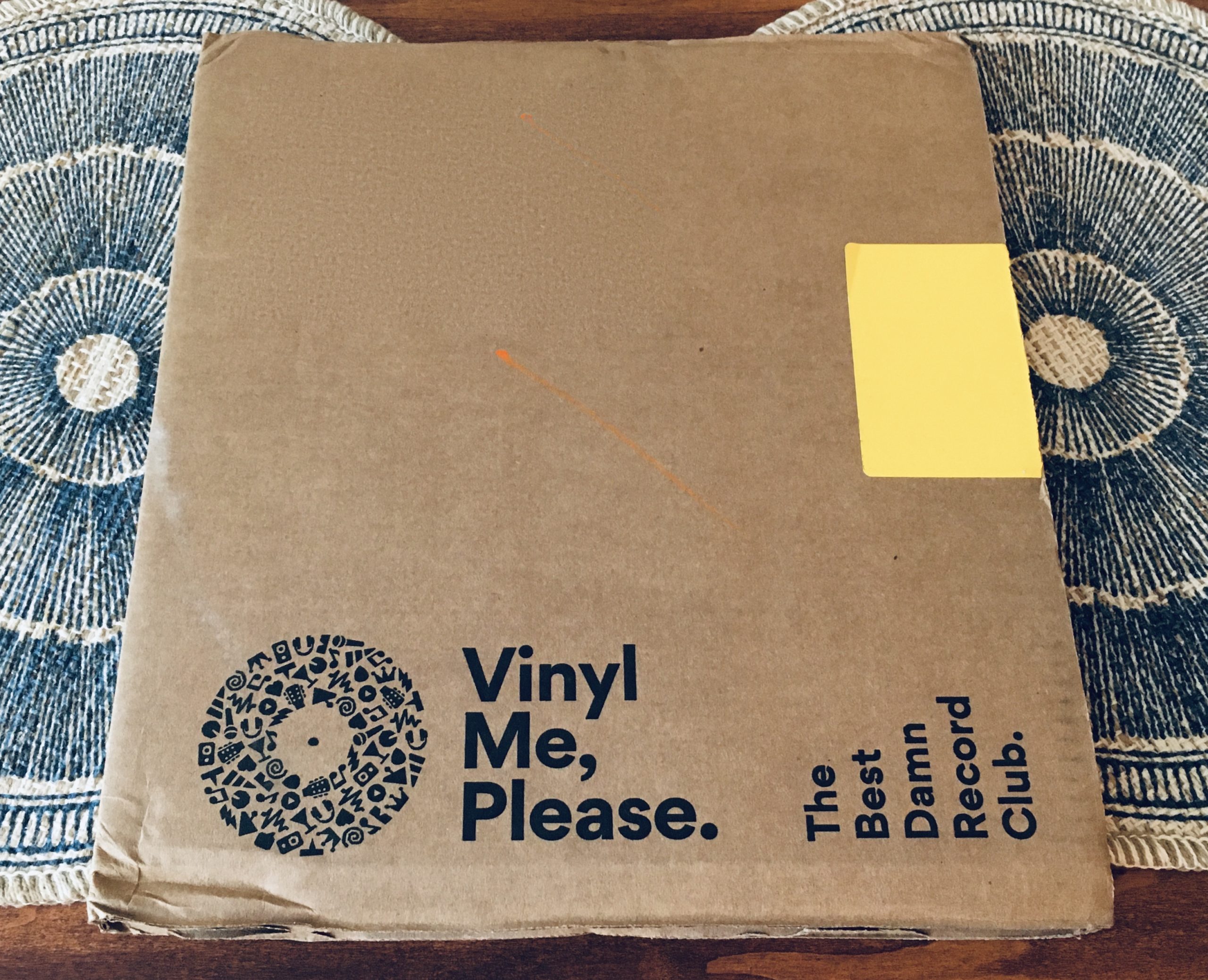 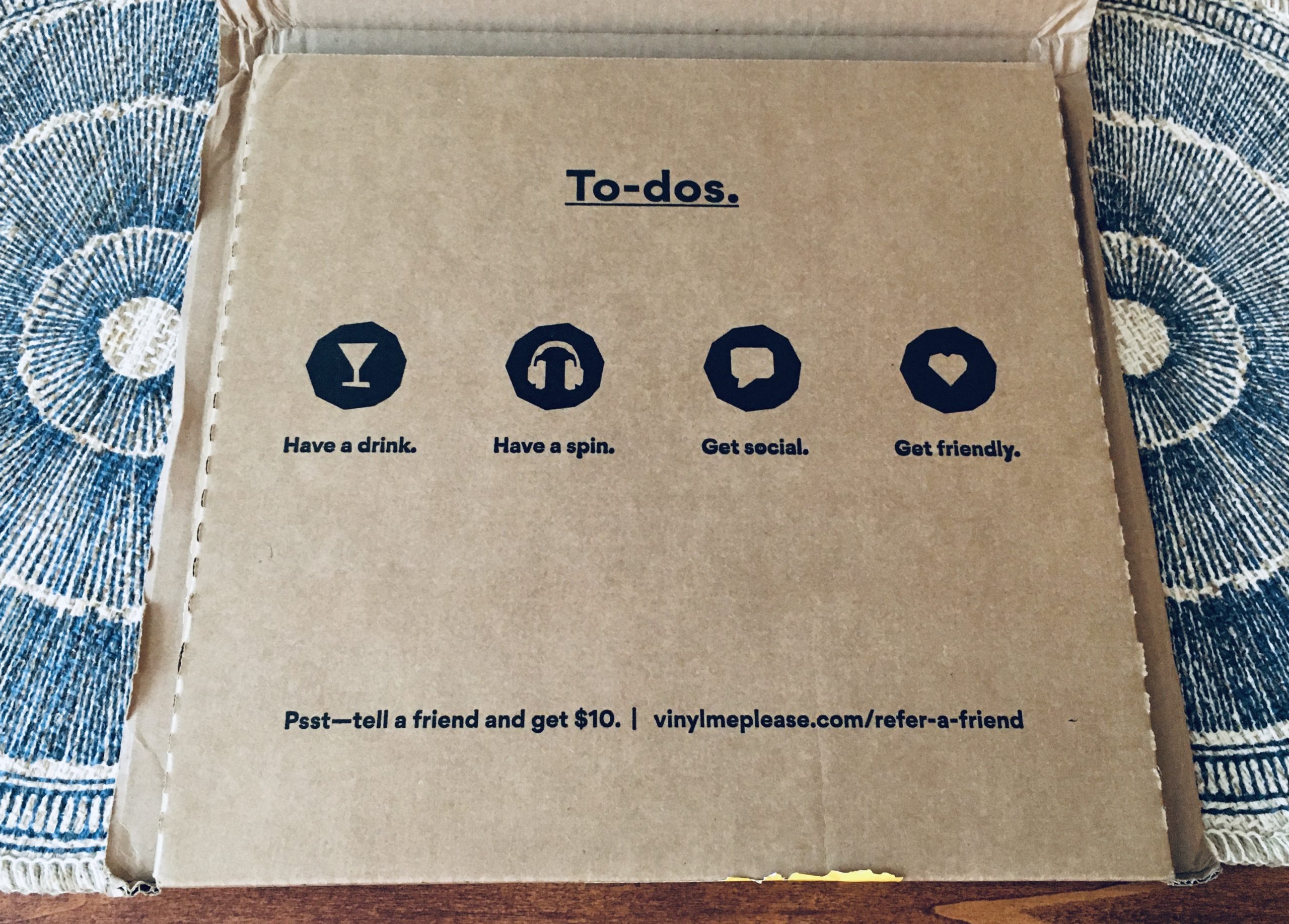 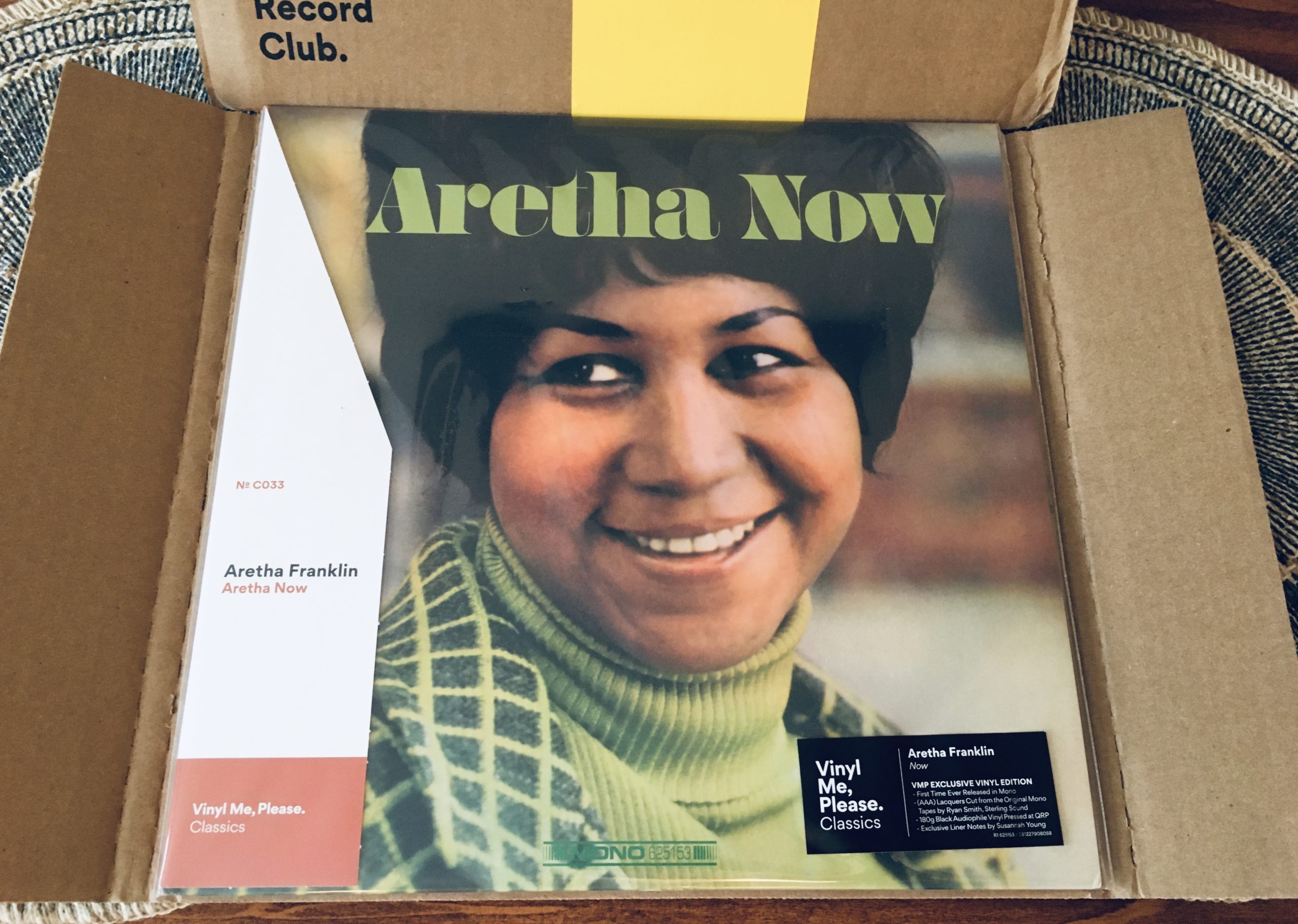 For the Love of Music, Please DO NOT BEND (or, how I learned that if you  wanna hop on board the Atlantic Records soul train, you gotta get down with that Vinyl Me, Please Classics thang)

If you’re among the masses who keep close track of which albums Vinyl Me, Please is releasing through their vaunted Essentials track, you might know that February’s Essentials pick was, in fact, not Aretha Franklin’s Aretha Now. It was actually The Roots’ widely adored fifth release, Phrenology. With all due respect to the Philly based hip hop outfit, I’ve never been a particularly big fan, so I was absolutely looking to swap when Phrenology was announced as the album of the month. Please know that if The Roots’ Phrenology is an album you adore, the VMP release is gonna make you love it even more.

That being said, my swap decision was made all the easier as Aretha Now was simultaneously announced as the Classics track. And if you read my December unboxing of Aretha Franklin’s I Never Loved A Man The Way I Love You, you know full well that I’ve been on a serious Aretha kick of late.

Now, as I’m certain that each and every one of you read and re-read that delectable dish of unboxing goodness, I’ll skip the history lesson regarding the who’s and why’s of Aretha Franklin’s legacy. In turn, I’ll also jump right into the action regarding Aretha’s 13th full-length release, 1968’s Aretha Now. Like 1967’s I Never Love A Man The Way I Love You, Aretha Now found the great Jerry Wexler calling the shots in the studio. It found the legendary Tom Down working the boards and arrangements. And it found Aretha surrounded by a veritable who’s who of first-rate session players like Spooner Oldham, Wayne Jackson, and Floyd Newman just to name a few.

Unlike that prior release, Aretha Now is comprised almost entirely of cover songs. And yes, some of those songs had already been made popular by legends such as Ray Charles (“Night Time Is The Right Time”), Dione Warwick (“I Say A Little Prayer”), Don Covay (“See Saw”), and Sam Cooke (“You Send Me”). They were also penned by the likes of Isaac Hayes, David Porter, Jimmy Cliff, Steve Cropper, King Curtis, and Burt Bacharach. Though Aretha Now doesn’t feature much original material, Aretha more than earns her “Queen of Soul” title throughout, re-arranging each track to put her own stamp on the songs. To say she accomplished that would be an understatement, with many believing Franklin’s versions of the songs immediately became the version.

Of the lone original track Franklin brought to Aretha Now, well, it’s a bit of an all-timer among Aretha’s anthems. Titled “Think,” and co-written with her soon-to-be ex Ted White, the song was the lead track on Aretha Now.  Like “Respect” – which was actually penned by Otis Redding – “Think” became a major hit for Franklin, charting at No. 7 on the Billboard Hot 100. Like “Respect,” “Think” became an instant symbol for both the Civil Rights and Feminist movements of the late ’60s. And like “Respect,” “Think” is widely regarded as one of the greatest songs ever recorded. Truth be told, “Think” is the sort of song that would make Aretha Now worth owning even if every other track on the album was garbage. The fact that they aren’t only proves Aretha Now is all the more vital a document of an iconic artist at the top of her game.

Look, sometimes album covers are legit artwork with subtle hints as to the general vibe of the music contained within. But when the music within is the equivalent of pure, sonic joy, well, sometimes a smiling face is all you need. 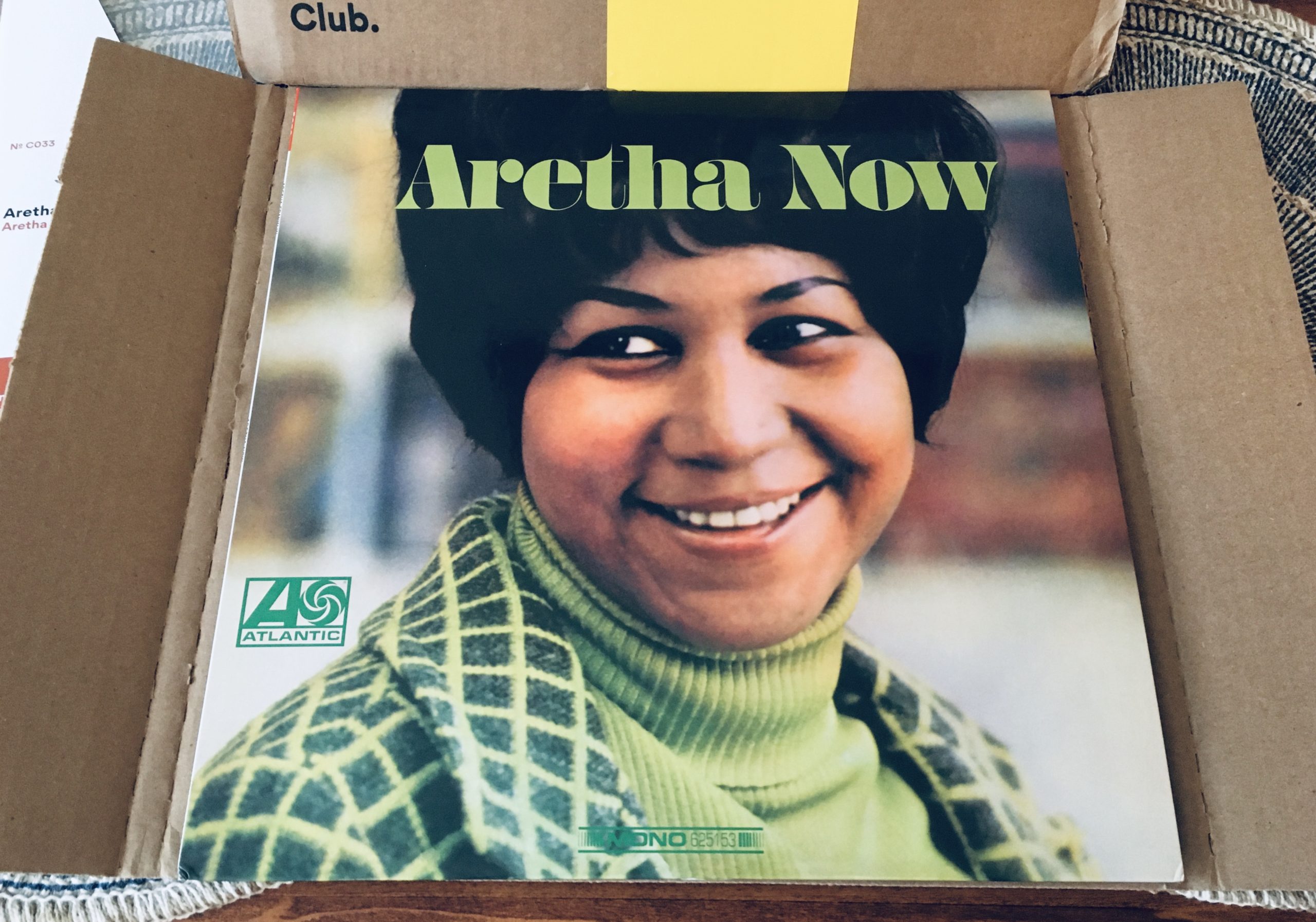 Just FYI – if you take nothing else from Aretha Now‘s luminous cover art, please note that Team VMP is wisely sticking with the Mono version of the album. Which is pretty sweet.

If you are looking for a little more insight about Aretha Now, feel free to spend some time reading Jack Springer’s liner notes on the back flap. 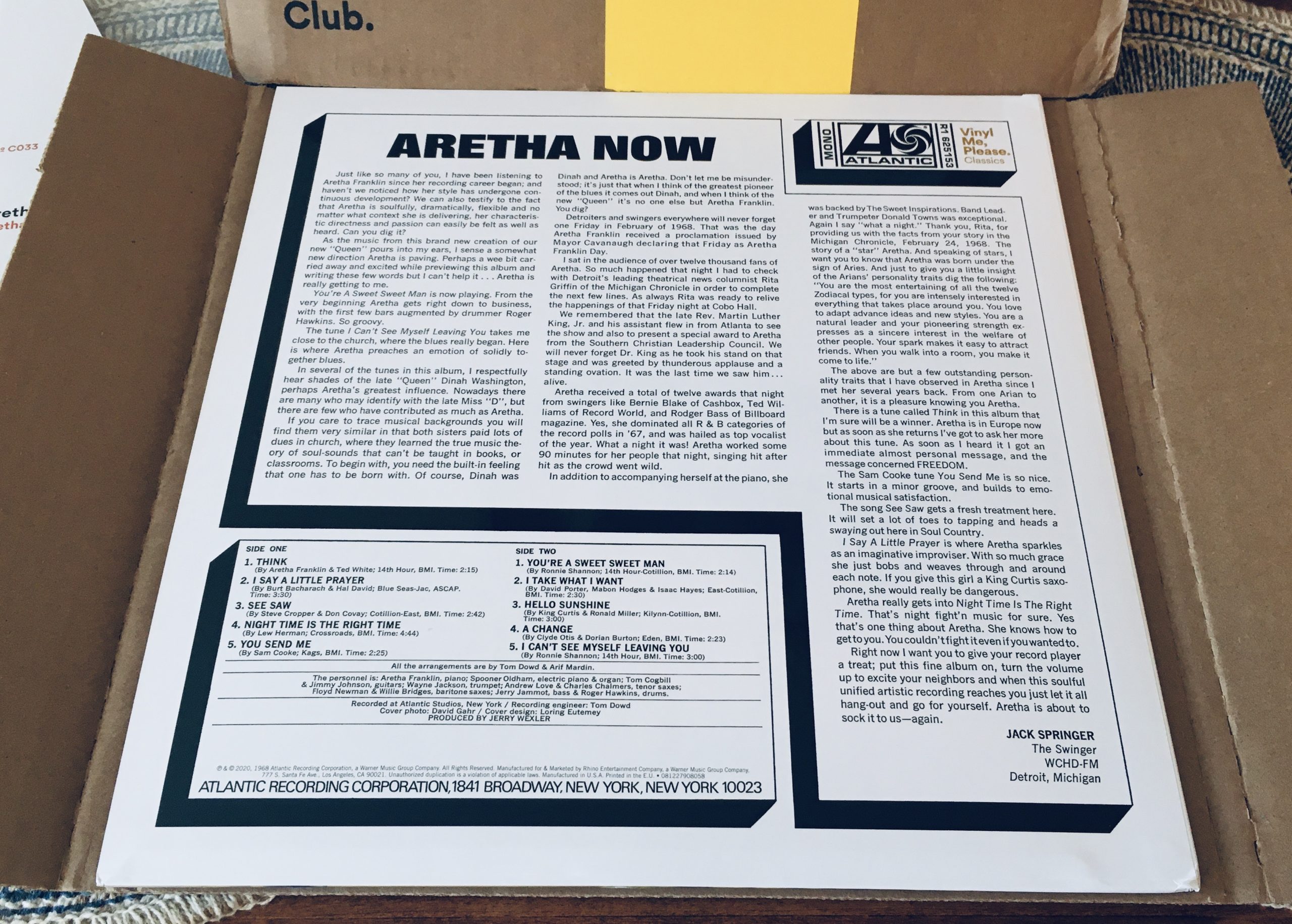 While you’re back there, take another moment to read over the track list and song credits. As mentioned, there are some impressive names listed there. 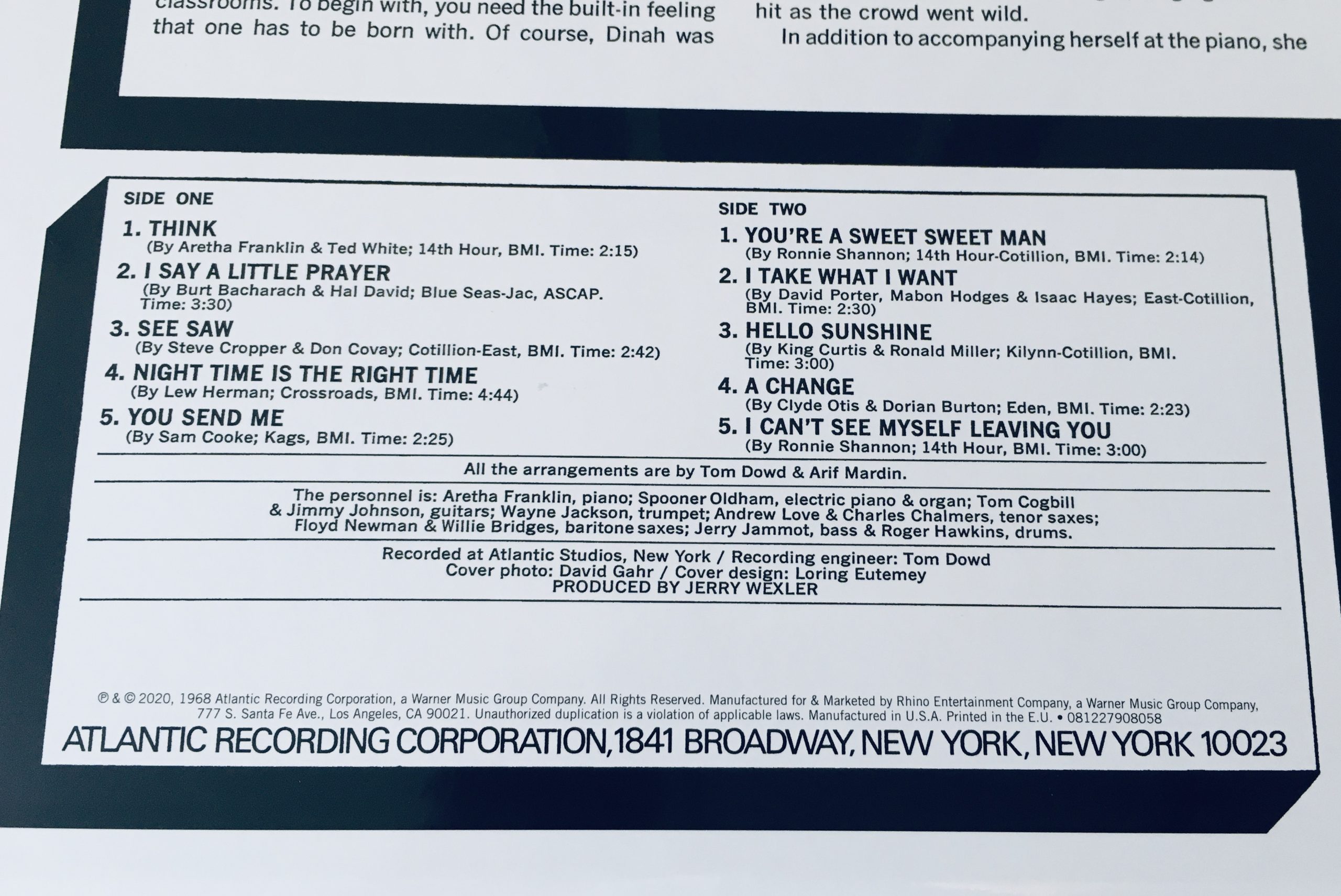 You’ll want to take a sec and dig on the gold, foil-stamped notation in the corner, ’cause it forever proclaims Aretha Franklin’s Aretha Now as an official Vinyl Me, Please Classics selection. 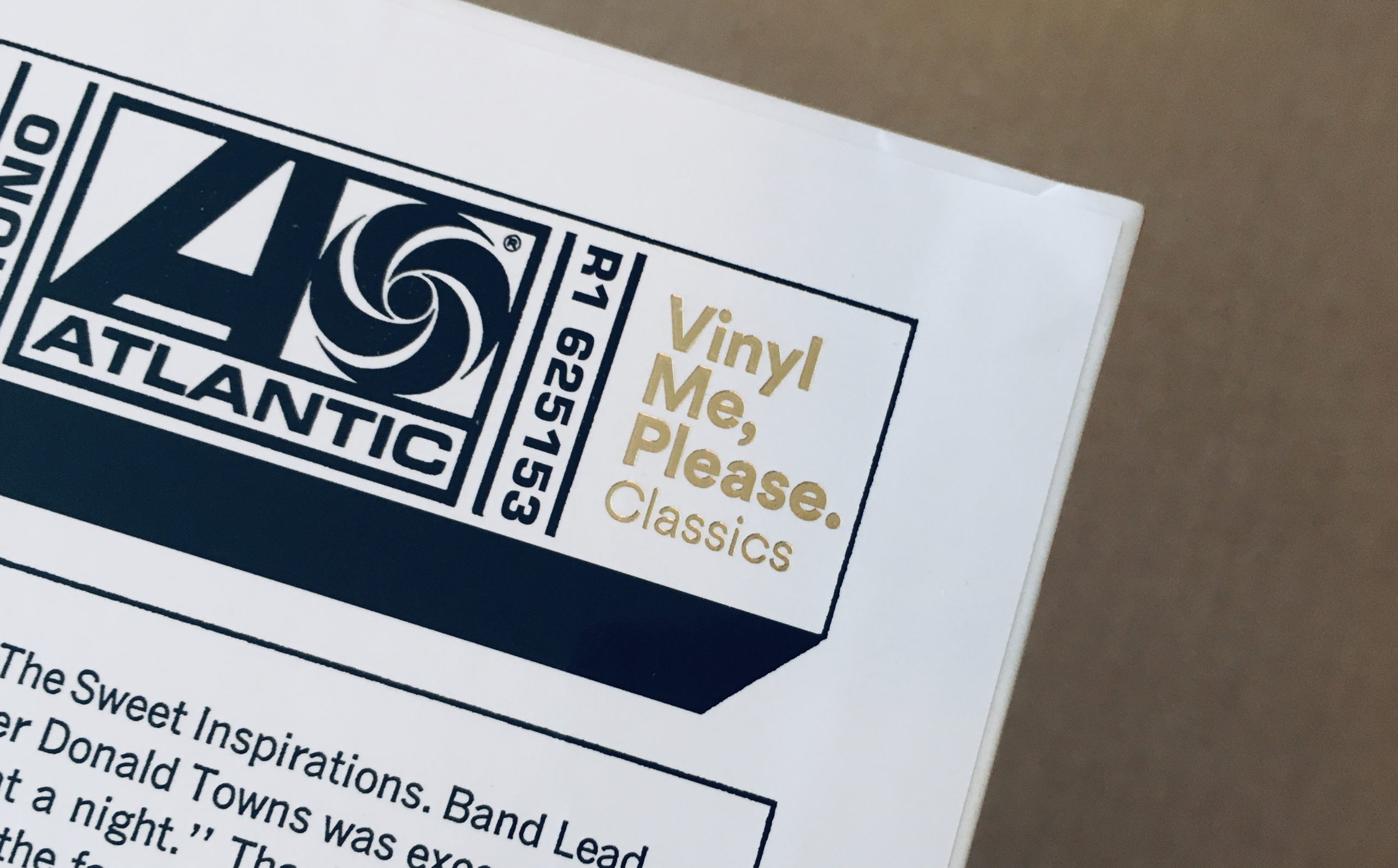 Now, before we get too deep into our unboxing, let’s all read over the vital information on this little hype sticker, because these are the features that actually make this pressing of Aretha Now such a legit Classics pick. 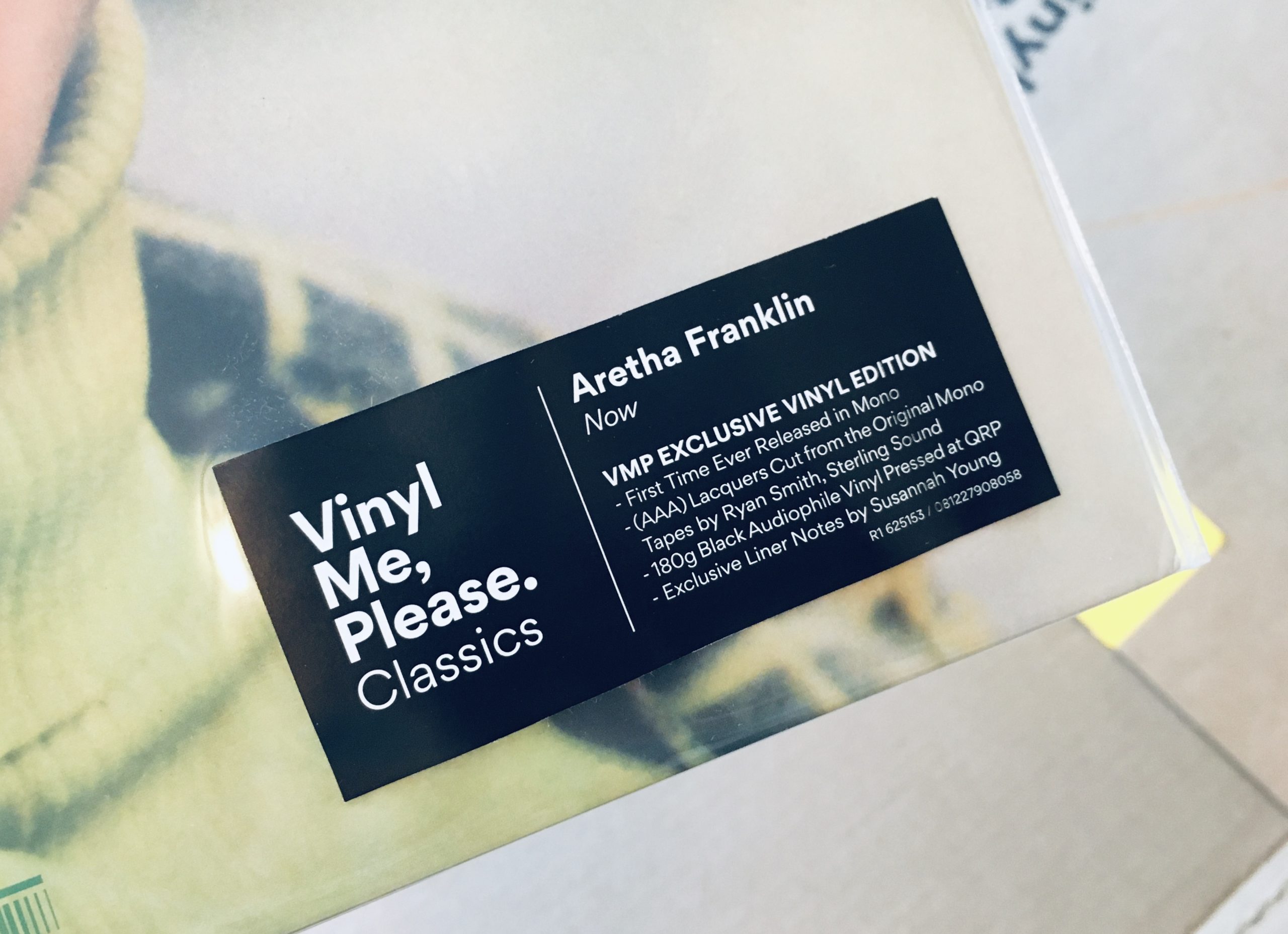 And before you start fumbling around with what’s inside that dust sleeve, let’s all just appreciate the heavy-duty, re-sealable protective sleeve Team VMP has packaged this beauty in. 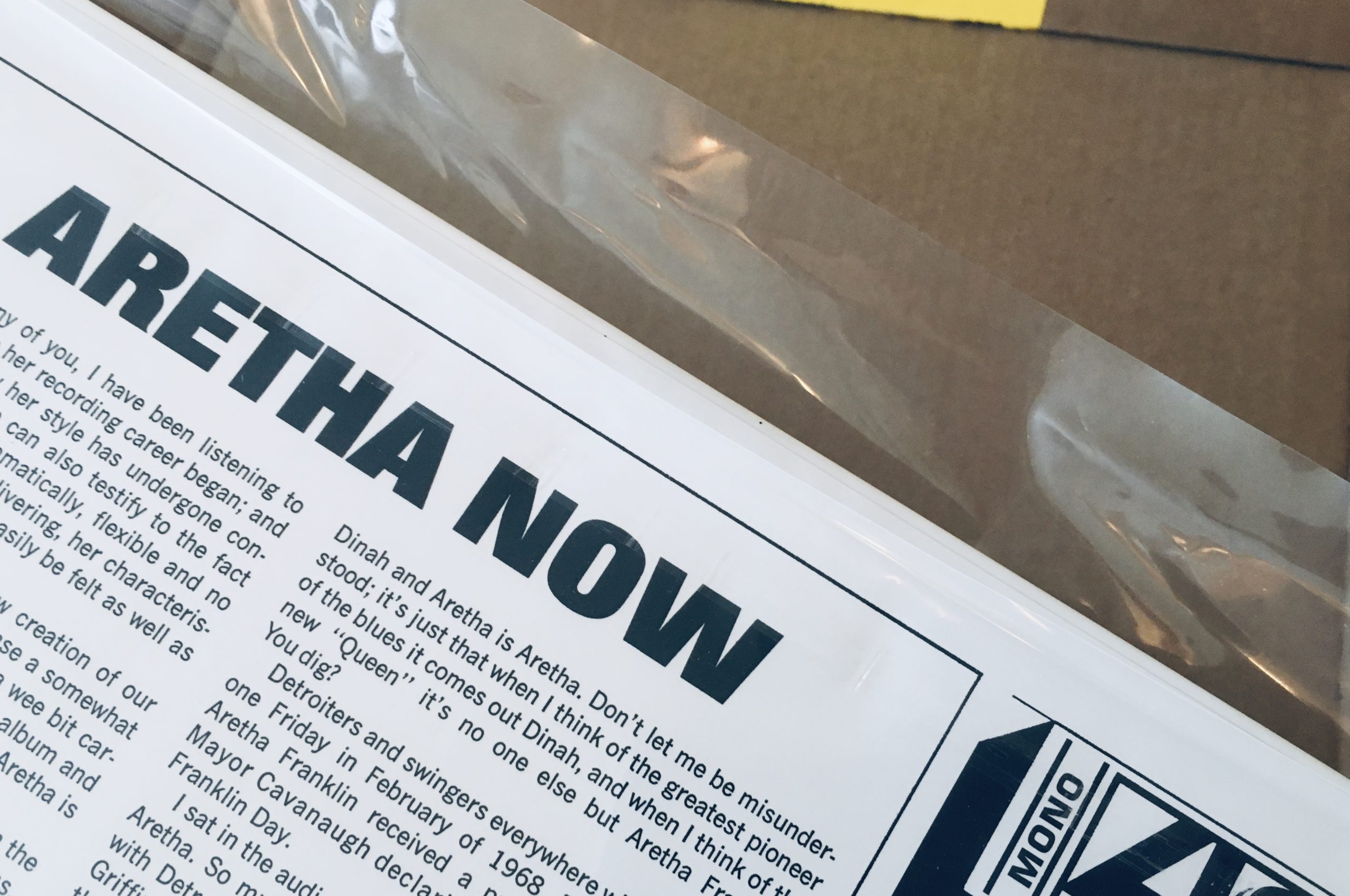 Once you’ve broken that plastic seal, spend another moment or two with the Vinyl Me, Please specific OBI-strip cradling the spine of your album, cause there’s more important info there. Like the artist’s and album’s name. And the catalogue number for the release in the VMP archives. 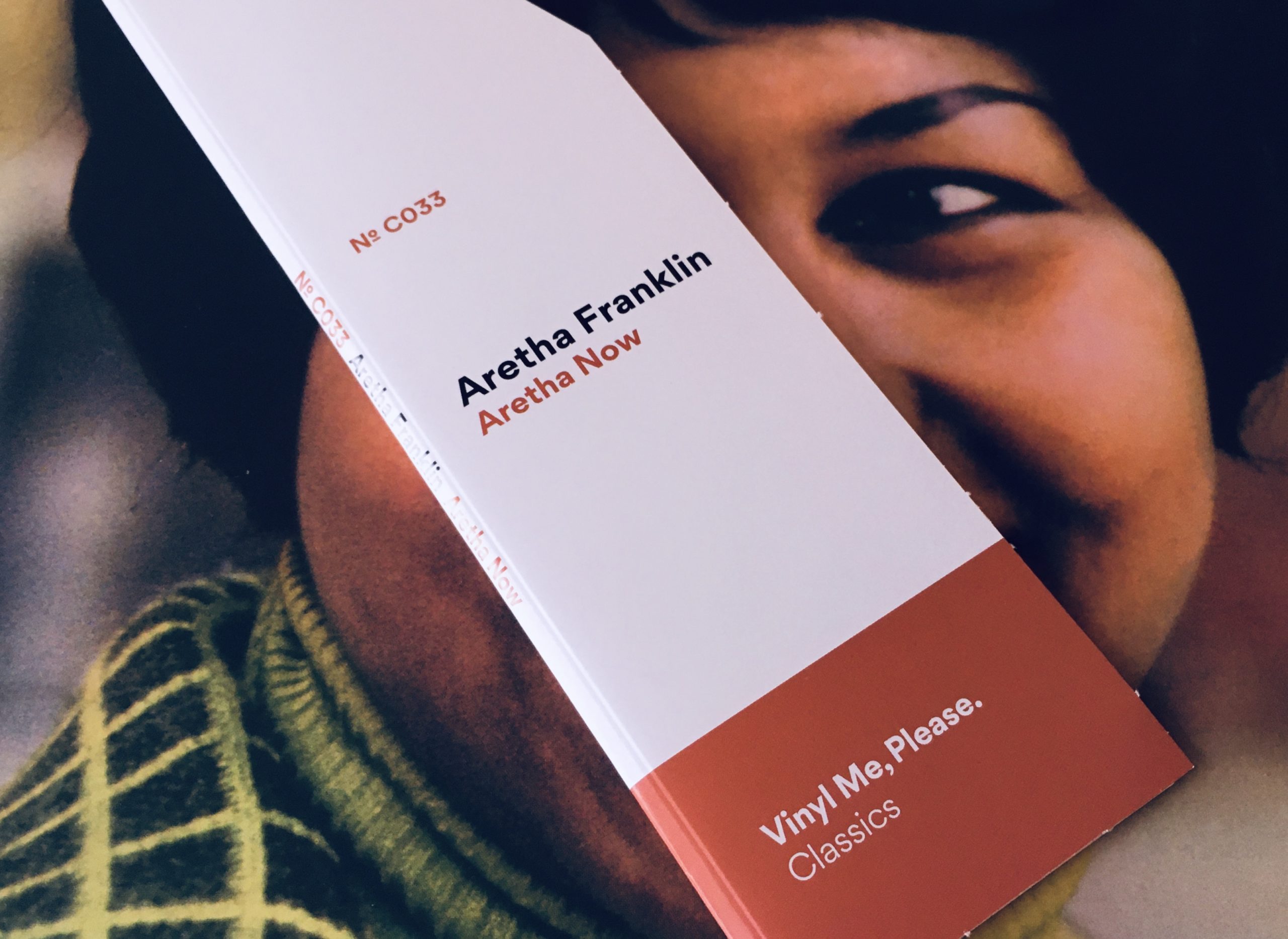 There’s a few words of the back fo that strip denoting why Vinyl Me, Please selected Aretha Franklin’s Aretha Now as February’s Classics track as well. 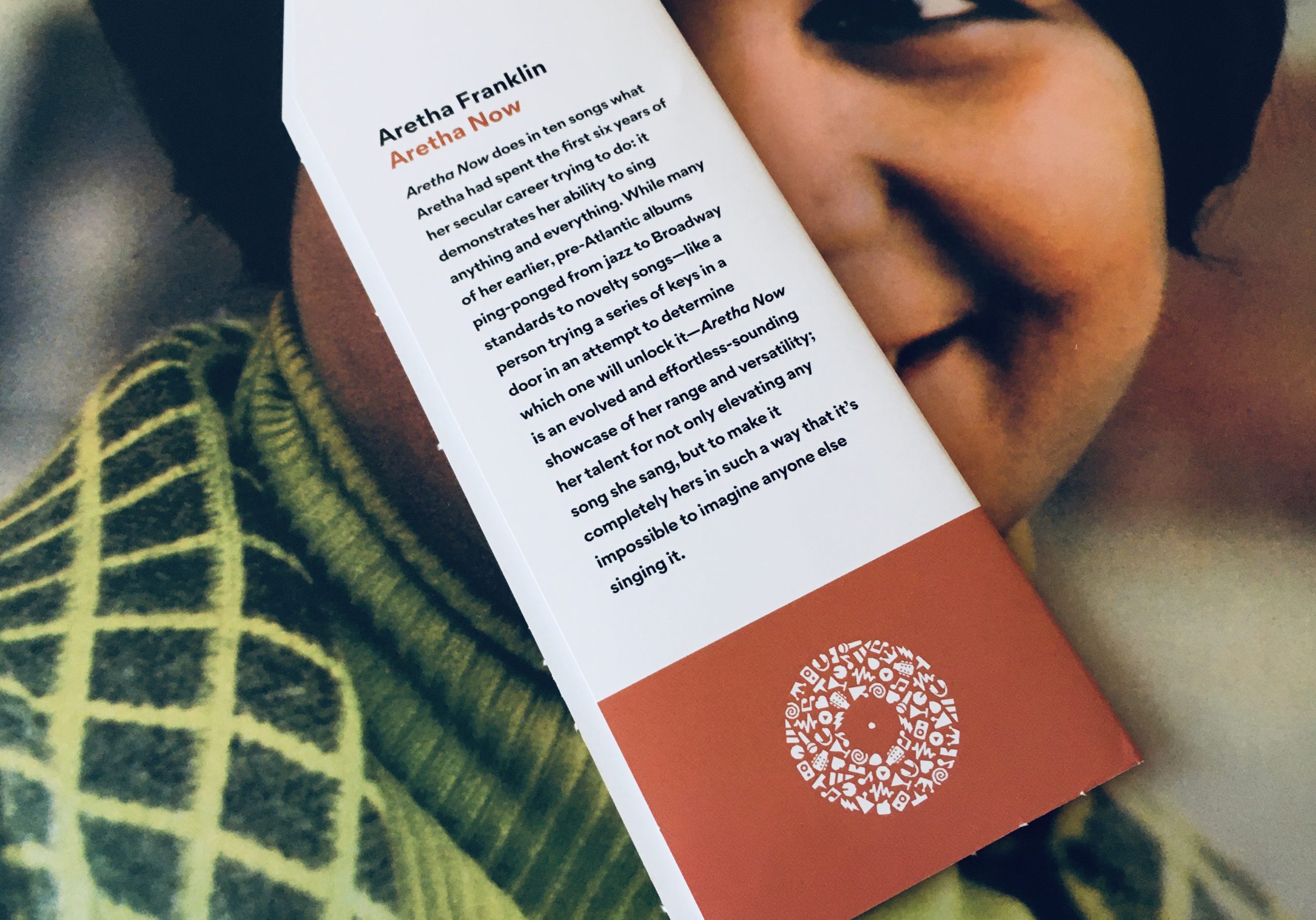 Now, the only drawback about opting into the VMP Classics track on any given month is that Classics picks do not come with original artwork or a companion cocktail like their Essentials brethren. Luckily, Team VMP more than makes up for their absence with a killer Listening Guide detailing the importance of each Classics selection. This month’s booklet comes with some wickedly insights into Aretha Franklin’s Aretha Now, courtesy of Chicago’s own Susannah Young. 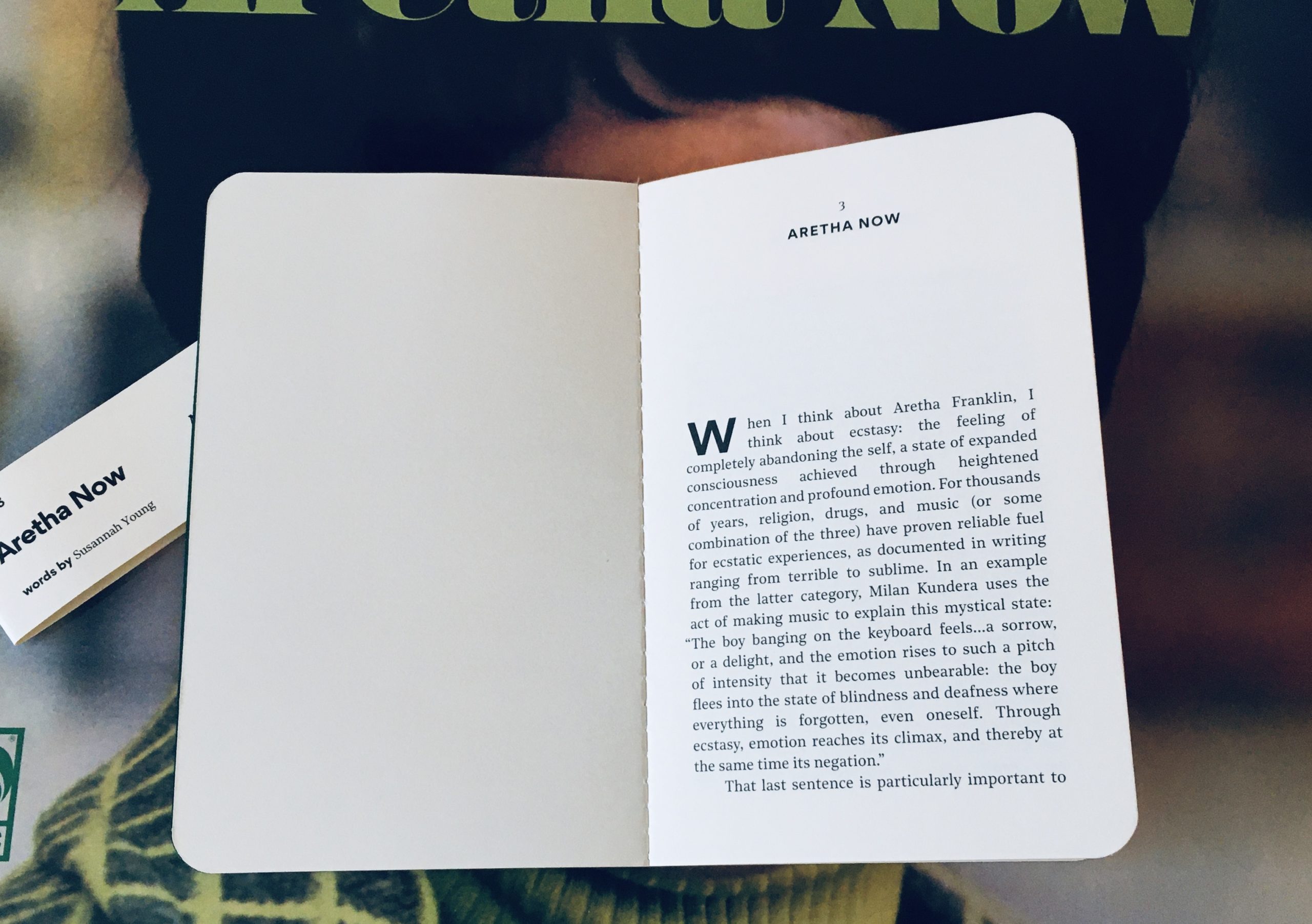 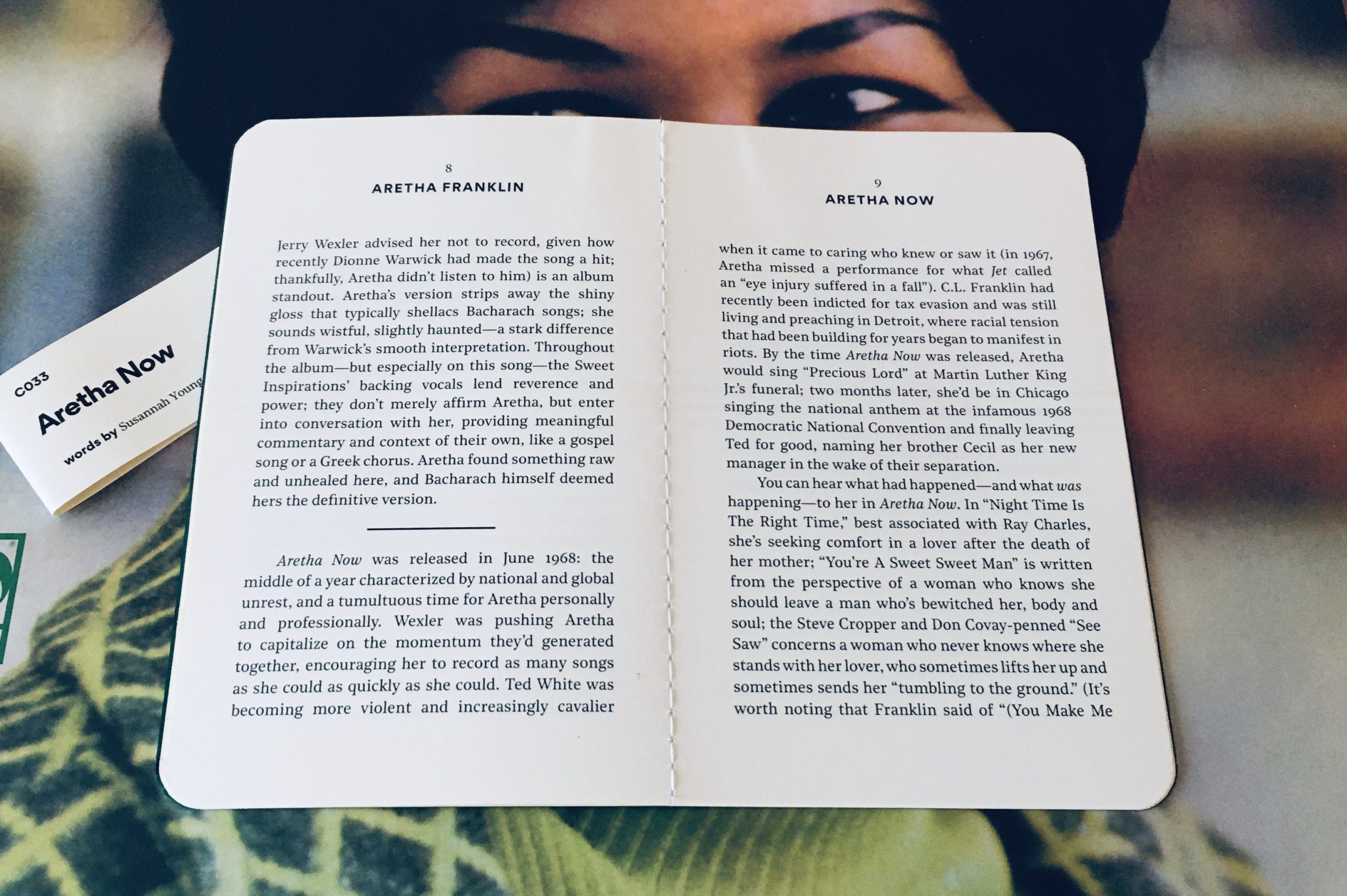 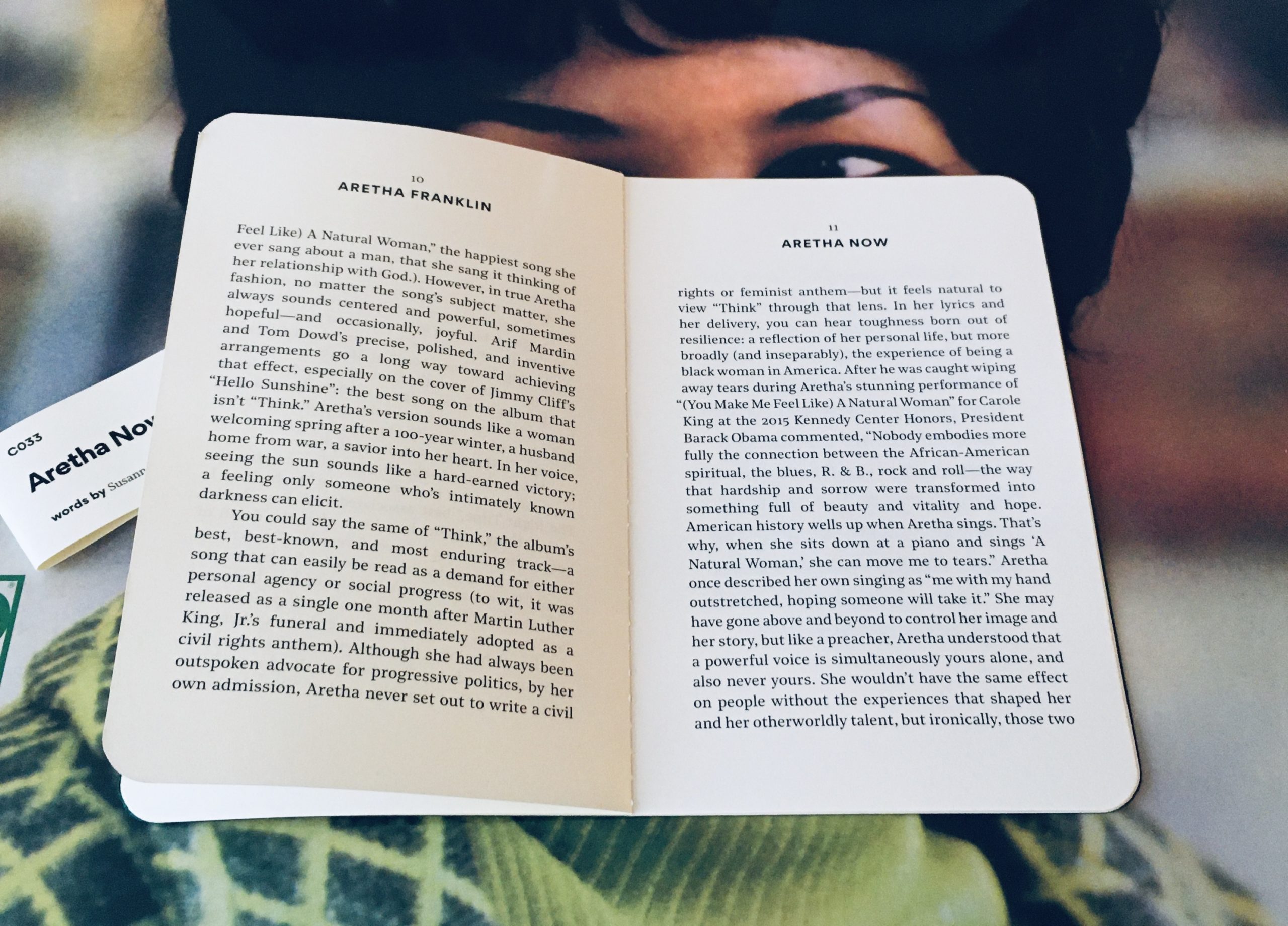 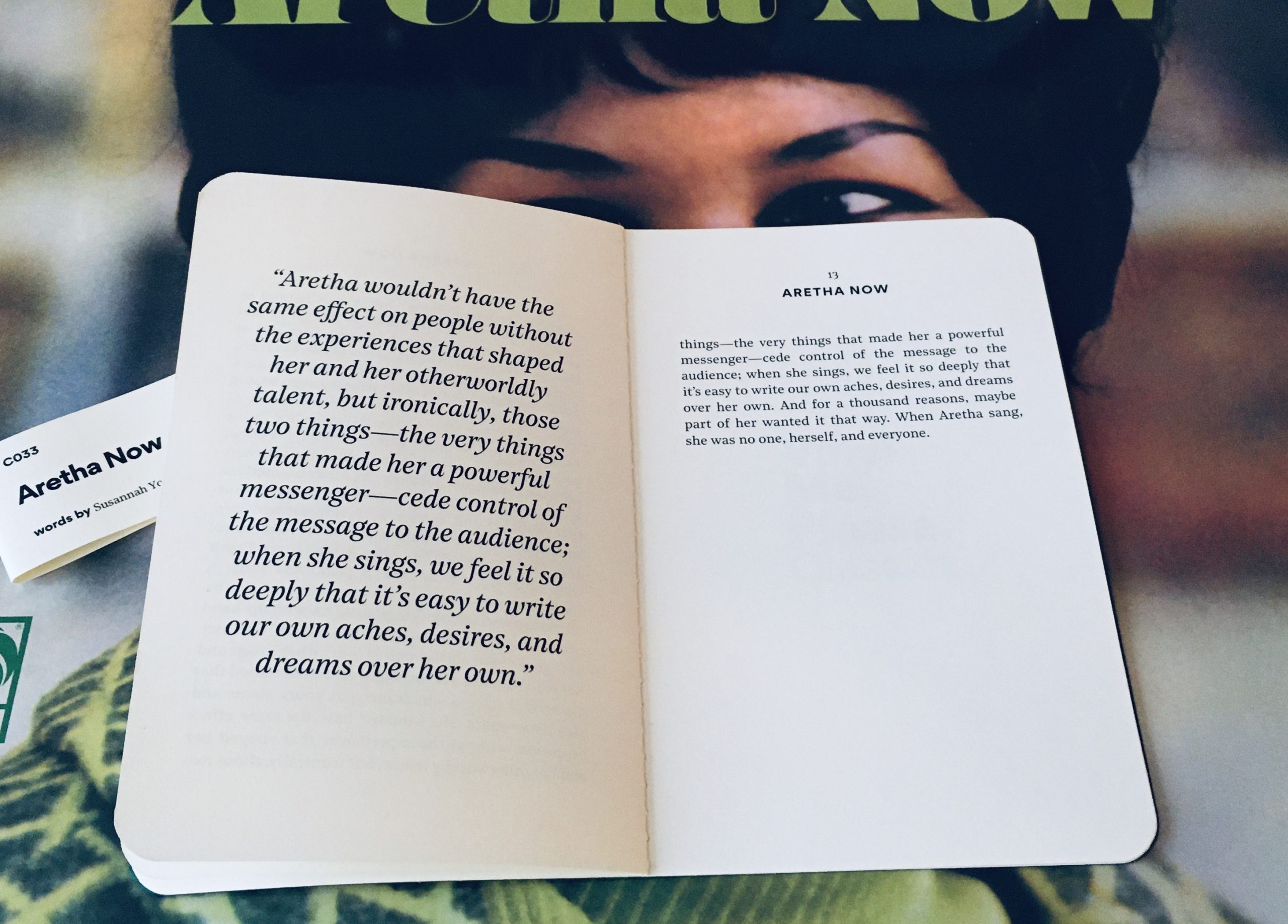 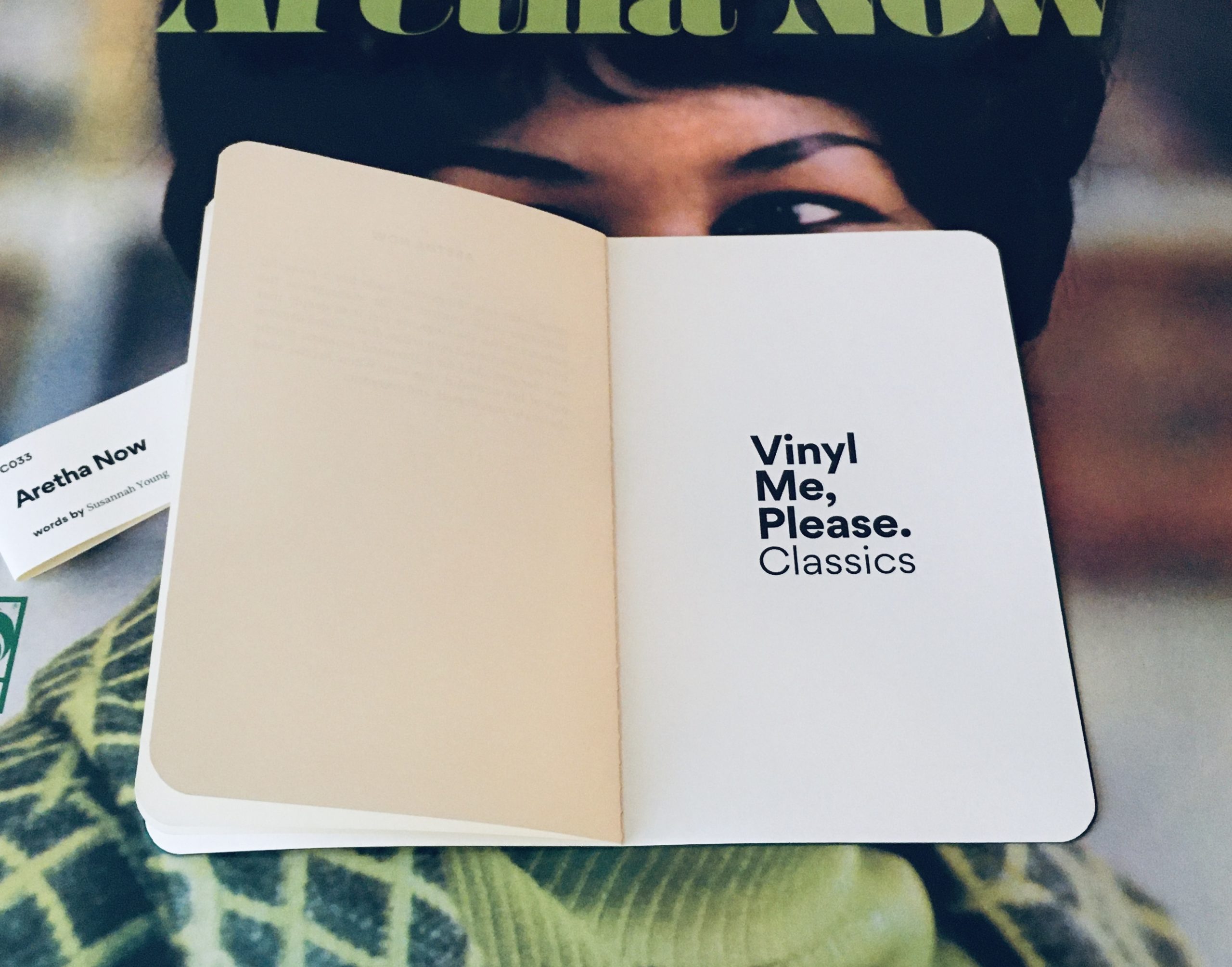 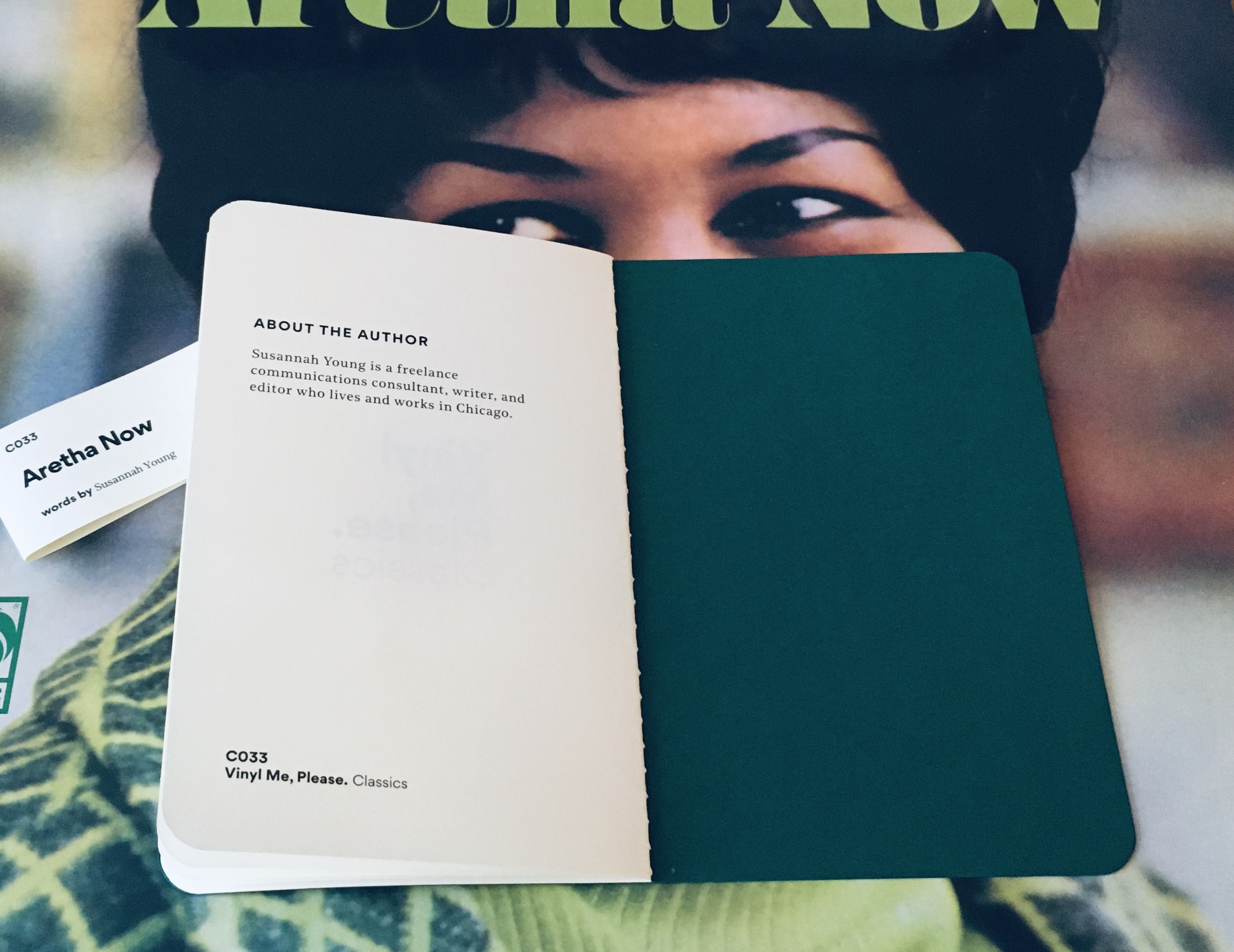 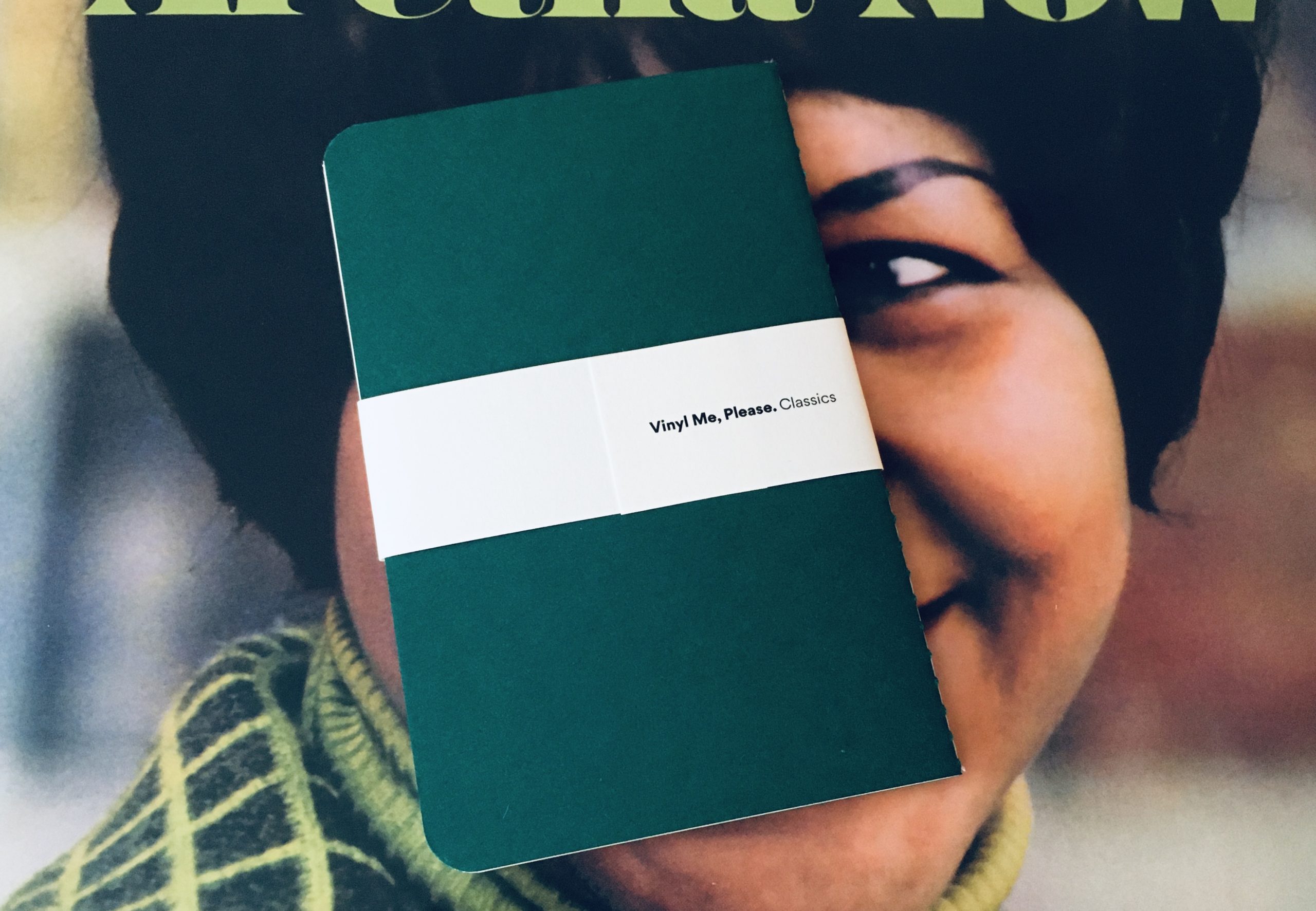 What about the vinyl inside that sleeve you ask? Well, it’s protected by this glorious archival grad poly sleeve. 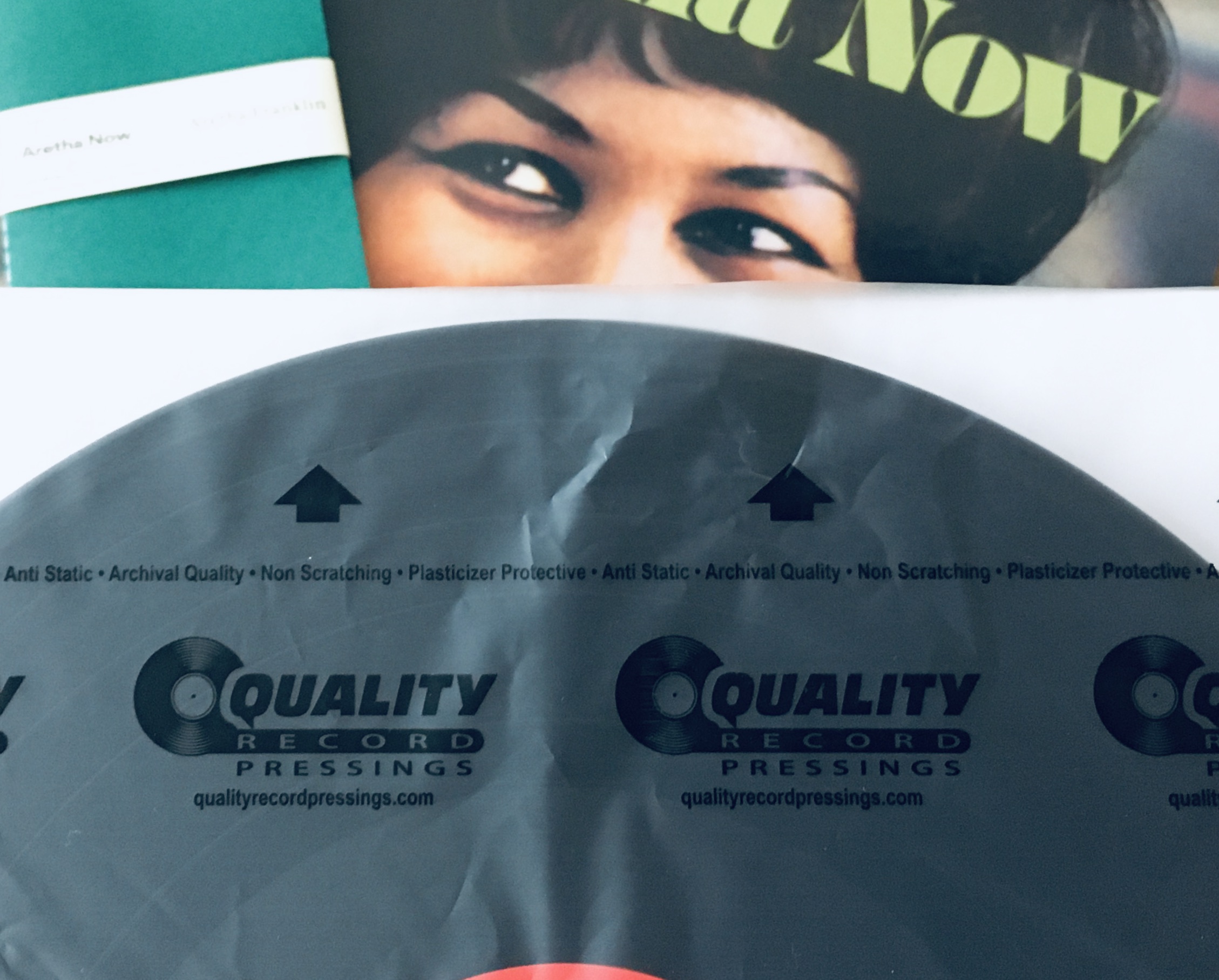 And like the woman who’s voice it contains, the wax is black, beautiful, and stronger that you can imagine. 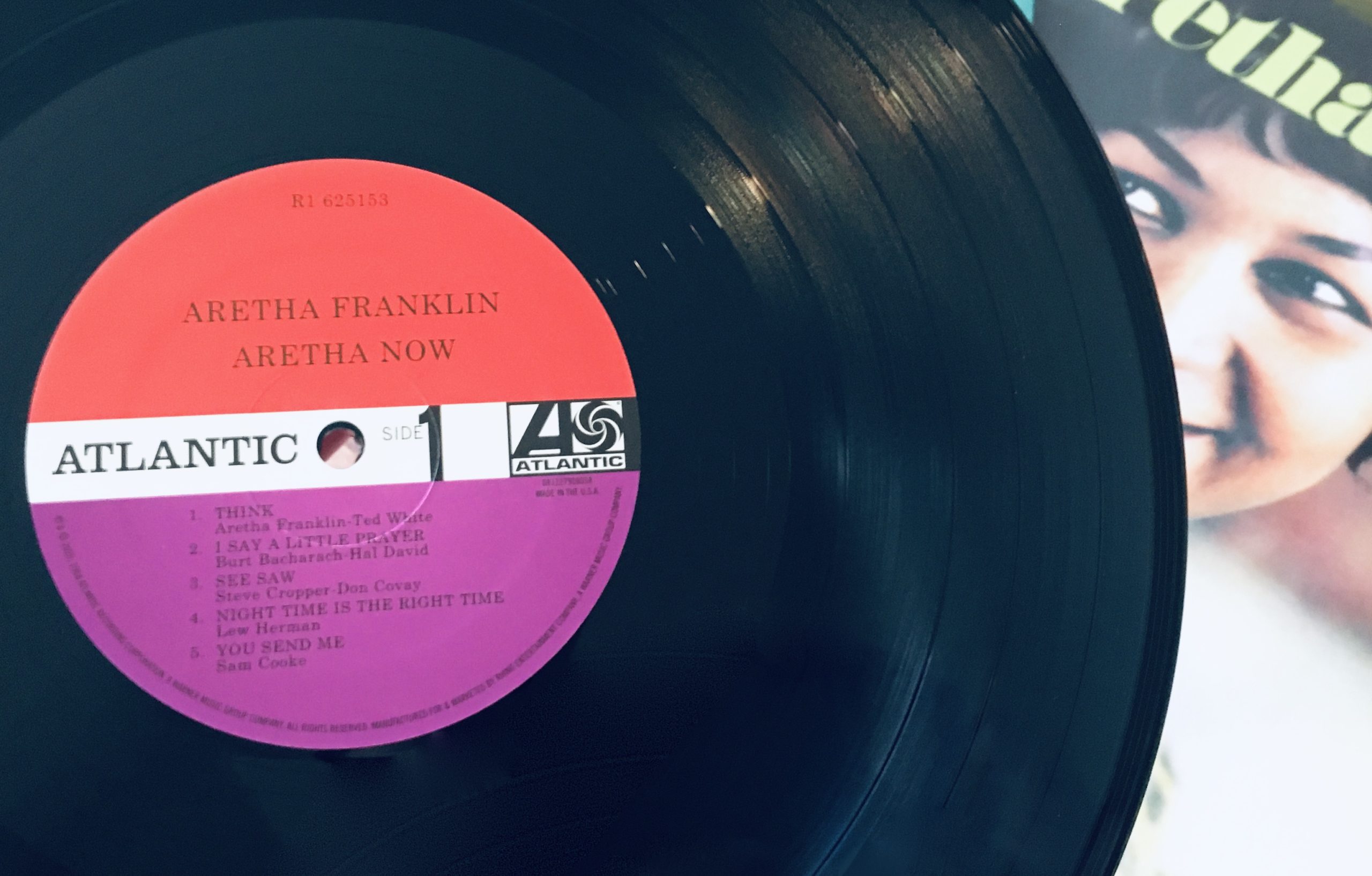 Make no mistake, it’s gonna bring some seriously soulful thunder to your deck as well. 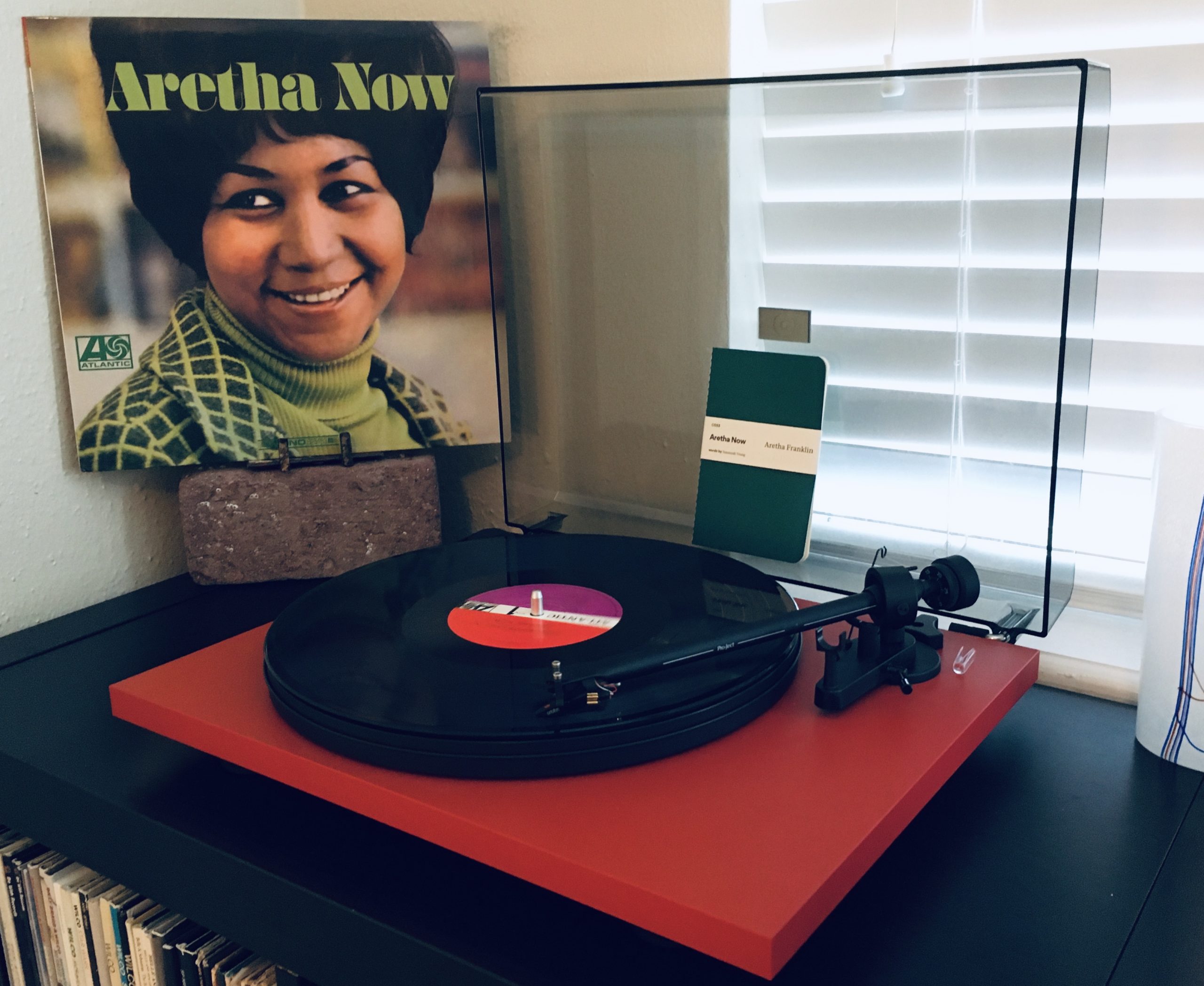 How’s it sound? Like Aretha f***ing Franklin singing her ass off for just under 30 minutes. Trust me when I say it really doesn’t need sound like anything else.

Look, musical discovery was, is, and shall remain the crux of my Vinyl Me, Please subscription. While they’ve introduced me to countless albums and artists with their Essentials releases,  their Classics sub is quickly becoming the jewel of their entire operation. I was almost ashamed to admit I didn’t have a single Aretha Franklin album in my collection prior to their Essentials release of I Never Loved A Man The Way I Love You.

After filling that shameful hole with a killer Essentials treatment, they’re now helping round out my burgeoning Aretha Franklin catalogue on the Classics side. And they’re doing it with an album that I likely wouldn’t have picked up on my own. As it is, I already cannot imagine my collection with Aretha Now in it. On that note, I’ll simply tip my hat to Team Vinyl Me, Please for continuing to deliver sonic diamonds to the masses with their Classics campaign.

A big THANK YOU to our friends at Vinyl Me, Please for sponsoring this subscription. Don’t forget to check out the official Vinyl Me, Please website and sign up to get some choice wax delivered right to your door every month! Here’s hoping we get another diamond delivered come March!

Shopify is the Latest Giant to Join Facebook’s Libra

Scholars Learn Better from a Book Than Screens

Learn to Code with Clicbot

CBD and Sex – How to Last Longer

How to Date Today When There Are So...

SpaceDesk is Your New Conversation Starter