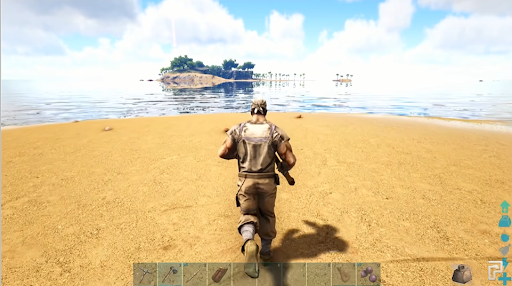 Ark: Survival Evolved gives players a wild jungle-life experience where you just have to stay alive. However, your survival depends on your ability to craft tools and weapons, find and eat food, and have some allies. Most times, your allies will likely be friends you enter the game with.

Also, you could befriend a different kind of creature – the game’s primeval wildlife, also known as dinosaurs. Sometimes, interacting with these enormous creatures could be pretty tricky. So, go through the tips below to up your survival game. In addition, Ark Survival Evolved Hacks (PC) and cheats will also help you overcome many hurdles.

Many guides hint at meat being one of the most nutritious meals in Ark: Survival Evolved. This is true, but one meat you may never get to eat is a dino, especially if you spawned newly. If you attack a dino with just your fist or your primary pickaxe, it’ll tear you to shreds.

If you notice your hunger level is low, the dodo bird is the safest thing to attack. You’ll easily knock out and kill a dodo with a few punches to the head. More importantly, make sure you cook your meat before eating them.

The first thing you must do before the taming process is to render the beast unconscious. You can achieve this by punching your bare fist or with a dull club. We advise against using your fist since it takes longer to knock the beast out, and your character also takes damage.

We advise you to use a slingshot if you’re unsure of the outcome when you get too close to the beast. However, ensure your blows are not too much so you don’t kill the animal. Also, you may kill the animal if it loses so much blood from hitting it with a sharp object.

Some dinosaurs are more difficult to tame than others. So, you should know what you’re in for before choosing a dinosaur for taming. The two basic uses of dinosaurs in the game are as a means of transportation and for farming. Some dinosaurs we recommend if you want something to tame are Doedicurus, Quetzal, Argentavis, Therizinosaurus, and T-Rex.

The Doedicurus, for instance, is one of the best dinos for farming stone and obsidian. Also, it doubles as a fine means of transportation due to its ability to roll. But if you want a dino with more farming abilities, you’d rather go for the Therizinosaurus. This herbivore effectively collects items such as wood, berries, hide, meat, and thatch.

After knocking a dino out, you’ll need to give it plenty of food to keep the taming bar up. However, the kind of food you give to your beast depends on what kind of animal it is. If it’s a carnivore, you’ll need to place some raw meat in its inventory.

On the other hand, you’ll need berries to tame herbivores. However, note that Oviraptors can’t be tamed with any of the food mentioned earlier – taming Oviraptors requires eggs. Sometimes, dinos in Ark don’t eat their food immediately; this shouldn’t make you panic. They’ll eventually eat the food when they get hungry enough.

You shouldn’t focus on exhausting your dino with activities and only pay back by feeding the beast. One of the major things you should try achieving is leveling up the beast. You level up your beast by engaging it in activities that allow them to earn XPs and boost their abilities.

Some simple ways to rack up some experience points is by allowing members of your tribe to sit on it or use it for farming resources. If you’re after more XPs, use the beast to fight and win other large beasts. The tougher the opposing beast, the higher the XPs.

It feels more like a fairy tale when you imagine riding astride a large primeval beast. But yeah, Ark: Survival Evolved allows you to do just that. With the tips above, you’ll be able to stay alive while you get the most out of your dino. But whatever you do, leveling up your dino should always stick to your heart if you want to achieve more with that beast.