LOS ANGELES, CALIFORNIA: Simi Valley Toy and Comic Fest, the only pop culture and toy show that did not skip a year during 2020’s COVID-19 global pandemic, is returning to Simi Valley, California. The full-day celebration of comic books, action figures, toy collecting, memorabilia, and more is celebrating the return of on-site, indoor events at the Grand Vista Hotel on Sunday July 18th, 2021.

Sponsored by Entertainment Earth, Simi Valley Toy and Comic Fest is welcoming Guest Artist Michael Swanigan, whose work in the cartoon industry spans decades. As a storyboard artist on some of your favorite 80s and 90s childhood relics, Michael is a wealth of knowledge and filled with stories describing how your favorite shows were created. Visit him in the Artist Alley!

Simi Valley Toy and Comic Fest has a special surprise for its attendees—for the first time at an event we are hosting Simi Mini Command Center, a room filled exclusively with Power Rangers guests and celebrities! With Simi Valley, CA being the home of the original House of the Book building (most famously used as the exterior of the Command Center in the original Mighty Morphin’ Power Rangers), we knew we had to pay homage to Simi Valley Toy and Comic Fest’s Hometown and give residents a Power Rangers experience they would not forget!

And in his FIRST EVER CONVENTION APPEARANCE, Actor and Voice Actor Richard Cansino, best known to Power Rangers fans as the voice of the monstrous KING SPHINX!

Bring those Lightning Collection figures to get signed because there is so much Morphinomenal Madness happening only at Simi Valley Toy and Comic Fest!

To show our love for the community, our excitement for the return of indoor events, and ensure that everyone who wants to come to the event has the opportunity, tickets for Simi Valley Toy and Comic Fest 2021 are only $5 at the door. Children twelve and under are free.

Simi Valley Toy and Comic Fest is a female owned and operated event, the brainchild of internet columnist and entrepreneur Loryn Stone. She is one half of Troublemakers Services, a group that owns and manages a portfolio of conventions and expos across California. Stone has two more single-day pop culture events coming to Ventura County, Megabit Game Expo at the Grand Vista Hotel on Sunday September 12th, 2021 and Ventura Toy and Comic Expo at the Crowne Plaza Hotel May 23rd, 2022.

Limited vendor space remains to those who would like to exhibit at the event  – email SVToyComicFest@gmail.com for more details or visit the website.

To keep up to date with all things Simi Valley Toy and Comic Fest you can follow the show on social media: 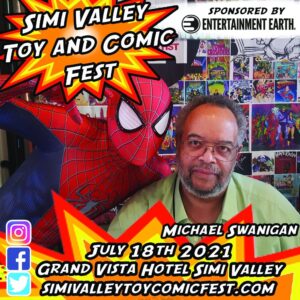