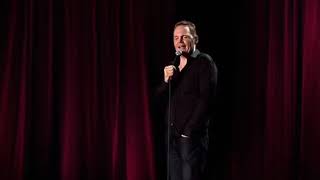 After stirring controversy with a sharp monologue on Saturday Night Live, Bill Burr made the most out of the show’s triumphant return this fall. While the 52-year old hosted the second episode of SNL’s 46th season, Burr’s comedic style was enough to make it seem like a season premiere all over again.

It was during this trending phase on Twitter when many people found out that Burr is not just in a relationship with Nia Renee Hill, but they have also been married since 2013.

As a result, it wasn’t long before the comedian’s new fans and old admirers flocked to the web to find out more about their relationship. If you happen to be making your way through the same sequence of events, here’s an inside look at the sweet relationship of this lovely couple.

Bill Burr Met Her During a Stand Up Comedy Night

While Burr has made appearances on TV shows such as Breaking Bad and has done voiceover work on F is for Family, he is mainly known for his standup routines.

With this in mind, it makes quite some sense that he met Hill during one such event way before they tied the knot. The couple doesn’t have the most public profile, but many also believe that they both decided to move in together shortly after their first meeting.

Bill Bur and His Wife Have Appeared in Projects Together

Speaking of F is for Family, both Burr and Hill have lended their voices to the former’s animated series on Netflix. While Burr plays the characters of Frank Murphy and Father Pat, Hill has brought Georgia Roosevelt to life.

But that’s not all. The couple also appeared on the second season of HBO’s Crashing, where they both portrayed fictionalized storylines. That episode is perhaps the most significant hint of the couple’s relationship in mainstream media.

They Have Two Children Together

Burr and Hill also started their family a few years ago and currently share two children together. Their daughter, Lola Burr, was born in 2017. Whereas, their son was born recently in June 2020.

While the couple revealed their pregnancy in May, Burr made the announcement regarding their son during his appearance on Jimmy Kimmel Live. Whereas, Hill took a more digital approach and shared a selfie with their newborn along with a sweet caption to boot.

They Have Been Together for Fifteen Years

As mentioned above, Burr and Hill tied the knot in 2013. However, they have been together for 15 years. During this time, Burr has made it a point to acknowledge the racism and subtle cues that are understood and processed by Hill, but which are often missed by Burr himself.

In fact, the point about racism and its harmful nuances has been integrated in Burr’s standup for a while. Mentioning his experiences and their contrast with Hill’s has become a driver for some of Burr’s recent standup material.

These little factoids give you a quick overview of the couple’s relationship. But if you wanted to learn more about them, you could follow Burr and Hill on their social media accounts.