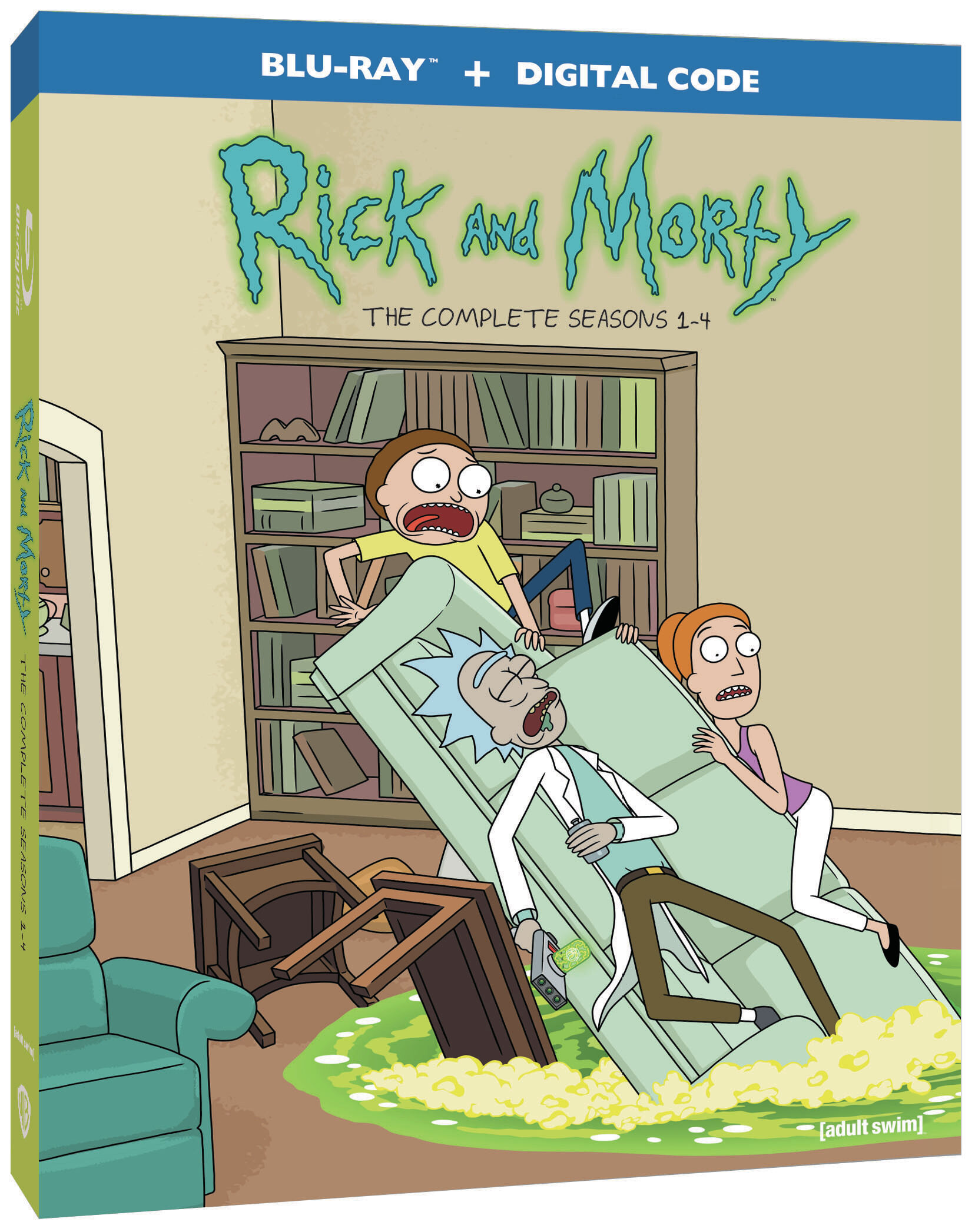 BURBANK, CA (January 12, 2021) Wubba-lubba-dub-dub! From creators Justin Roiland (“Adventure Time”) and Dan Harmon (“Community”), go on an intergalactic journey across the multi-verse with the release of Rick and Morty: Seasons 1-4 boxed set from Warner Bros. Home Entertainment on March 2, 2021. Get ready to binge on one of cables #1 watched comedies – and follow the misadventures of America’s favorite crazy scientist and his grandchildren with this outrageous boxed set which includes all 41 episodes from the first four seasons of the award-winning series, along with copious special features, including audio commentary, deleted scenes, “Inside the Episode” segments, numerous featurettes, past animatic sketches, and more. For a limited time, fans who purchase the set will receive an exclusive poster from the series. Rick and Morty: Seasons 1-4 is priced to own at $79.99 SRP for the DVD ($89.99 in Canada) and $89.99 SRP for the Blu-ray ($99.99 in Canada), which includes a Digital Copy (U.S. only). Rick and Morty also available to own on Digital via purchase from digital retailers.
After having been missing for nearly 20 years, Rick Sanchez suddenly arrives at daughter Beth’s doorstep to move in with her and her family. Although Beth welcomes Rick into her home, her husband, Jerry, isn’t as happy about the family reunion. Jerry is concerned about Rick, a sociopathic scientist, using the garage as his personal laboratory. In the lab, Rick works on a number of sci-fi gadgets, some of which could be considered dangerous. But that’s not all Rick does that concerns Jerry. He also goes on adventures across the universe that often involve his children, Morty and Summer.
With Blu-ray’s unsurpassed picture and sound, Rick and Morty: Season 1-4 Blu-ray release will include 1080p Full HD Video with DTS-HD Master Audio for English 5.1. Featuring all 41 episodes from the season 1-4 in high definition, as well as a digital code of the seasons (available in the U.S. only).

Rick and Morty is available to own on Digital. Digital allows consumers to instantly stream and download all episodes to watch anywhere and anytime on their favorite devices. Digital is available from various retailers including iTunes, Amazon Video, Google Play, Vudu, PlayStation, Xbox and others. A Digital Code is also included in the U.S. with the purchase of specially marked Blu-ray discs for redemption and cloud storage.

Warner Bros. Global Kids, Young Adults and Classics (GKYAC) brings together Cartoon Network, Adult Swim, Boomerang and Turner Classic Movies (TCM), as well as Cartoon Network Studios and Warner Bros. Animation. Among the iconic franchises, series and characters under the GKYAC banner are Looney Tunes, DC’s animated Super Heroes, Rick and Morty, Craig of the Creek, the classic Hanna-Barbera library, Tom and Jerry, Scooby-Doo, Warner Bros.’ unrivaled film library, and many more.
GKYAC’s mission is to be the premier global provider of kids, family, young adults, and classics content and brands. The group’s programming supplies unique and compelling content for HBO MAX, WarnerMedia’s direct-to-consumer platform. Uniting these award-winning networks and innovative brands helps maximize opportunities and growth potential, both as standalone businesses and as content generators, to drive and support its franchises, cross-studio initiatives as well as ratings.
Warner Bros. GKYAC’s content is currently distributed in 192 countries around the world and the division’s networks are in 500 million homes, delivered through more than 65 channels in 31 languages.