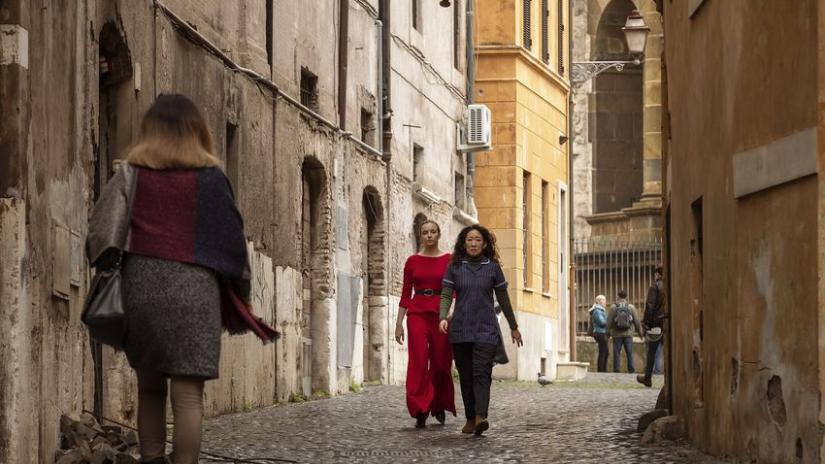 For a brief moment, I actually thought this might have a happy ending. I could see Eve and Villanelle in their new Alaskan home, drinking cocoa in front of the fire, reminiscing about that time in Rome when Villanelle killed that guy, and then Eve killed that other guy, and it would all seem like a distant memory, and they’d both just laugh and laugh.

But there was really only one way this season could end. Season One ended with Eve almost killing Villanelle, and now Villanelle’s returned the favor. And while we can be pretty sure Eve’s not actually dead, we don’t have a good reason to believe that other than the fact that Killing Eve is too damn good not to continue, and it wouldn’t make much sense without the titular character. But that sure looks like Eve’s dead body lying in the ruins of Ancient Rome.

But even if Eve’s still alive, it’s still a heartbreaking way to end what’s been another phenomenal season. We’ve watched Eve take on more and more of Villanelle’s characteristics, and the attraction between the two has been unmistakable. And with the success of the Aaron Peel mission on the line (or so Eve thinks), and with Hugo bleeding out in the hallway, Eve still drops everything to run to Villanelle’s rescue. Of course, Villanelle isn’t really in immediate danger (has she ever been?), but that’s beside the point. What matters to her is that Eve comes running when she calls. She’s the most important person in Eve’s life, and vice versa.

In fact, despite warnings from Carolyn and Konstantin, both women refuse to leave Rome without the other. At that point, maybe both of them really are thinking about what a life together would look like. We know that’s what’s on Villanelle’s mind, but maybe Eve has finally accepted the fact that, despite her psychopathic tendencies and her proclivity for violence, this is the person she wants to be with. She’s bored with her old life, too, and so maybe the two of them are just destined to be together.

Throw in a couple of axe blows to Raymond’s skull, and Eve’s transformation is complete. She may not be a cold-hearted killer like Villanelle (at least not yet), but she’s definitely a killer now. After Paris, she was just an attempted murderer. Now there’s an actual dead body (or at least what’s left of it) to prove that she really can take a life.

And that’s exactly what Villanelle wants. She says she wants Eve to know what taking a life feels like (wet, apparently). But what she really wants is for Eve to embrace killing just like she has. She believes they’re the same as well, and so I think she actually believes that Eve will be happier if she just leans into the darkness and does what comes naturally. And the only way to accomplish that is to give her a nudge in that direction.

And it might have worked had it not been for that damn gun. If Eve doesn’t see the gun, she never figures out that burying an axe in Raymond’s head was completely unnecessary, which means that Villanelle essentially tricked her into doing it. And while Villanelle’s feelings for Eve may have been genuine, it’s not hard to see a pattern of manipulation to win Eve’s heart (or something like that) that stretches across the entire season (and that almost works).

But even without the gun, there’s probably no happy ending for these two. At the end of the day, as much as Villanelle (and maybe even Eve, on some level) would like for it to be true, they’re really not the same. Eve will never be the person who can slit someone’s throat and feel no remorse. She’ll never enjoy watching the light fade from someone’s eyes. She’s just not wired that way. And because of that, she’ll never be able to truly embrace life with Villanelle. It just wouldn’t work. It would be exciting for awhile, but the excitement would eventually give way to a mixture of guilt and disgust. And Villanelle would get bored, and things just wouldn’t end well. So maybe this is for the best (except for the whole gunshot thing—that’s probably not good).

So where do the two of them go from here? We know there’s a third season in the works, so the story will continue, but in what form? My guess is that, once we figure out how Eve survives the gunshot, both women will be looking to settle the score against the other. If Season One was about bringing Villanelle to justice, and Season Two has been about bringing the two of them together (and having it end very, VERY badly), Season Three will most likely be about revenge. Whatever direction they choose to take, I’m almost certain it’ll be worth watching.

Thanks to all of you for following along with us this season—it’s been a great one!