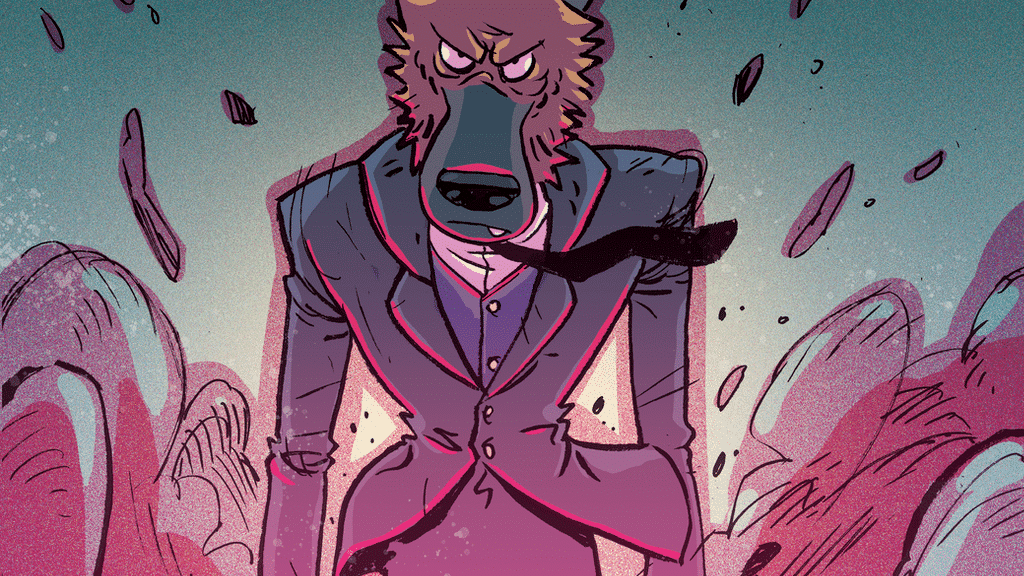 It’s always great when we find new creators in the comic book industry who are ready to tell engaging stories in interesting ways, and Garrett Gunn is just that. Gunn is a rising star in the comic book industry, quickly garnering fans through his action-and-humor-packed stories, such as Cold Dead Hands, Franklin and Ghost, and Warcorns. He has been gaining in popularity due to his unique ideas and innovative storytelling.

Gunn’s storytelling ventures started in 2013 with the release of his first comic, Days to Come. He has since produced a wide range of content and isn’t stopping any time soon. His latest project, Good Boy, co-written by Christina Blanch, is currently wrapping up a Kickstarter campaign. So far, they have surpassed $30,000 and are still going! If you want to be part of the lucky 500+ backers who get to reap the benefits of the campaign in the form of extra content and early access to the comic, check out the Kickstarter campaign here. Right now, if you sign up for the campaign, you can also win your own sketched covers of Good Boy as a special add-on for the last 48 hours of the campaign—but act now if you want to try and grab one of your own, as they’re very limited!

The Kickstarter campaign closes at 9:51 am PDT on Thursday, June 24th.

For those unfamiliar with the story, Good Boy is a spin-off of a certain action classic, where a dog gets revenge on the killer of his owner. Gunn explains the story as follows:

Elise: You always have a lot of projects on the go, but what are you working on right now?

Garrett: The biggest thing we are focusing on right now is a project called Good Boy, which is a reverse John Wick. It follows the human guys in a staged home invasion and the dog hunts down the people responsible. It first started as sort of being this fun parody thing. My writing partner, Christina Blanch—who did Damnation of Charlie Wormwood, Tales of the Crypt, and a bunch of stuff—is a massive John Wick fan. So, when I told her, I was like “Hey, you’ve got to help me write this. Because I’m like a new

fan of John Wick and have the story established, but I need you to come in and make this more John Wick-ish.”

So, that was going to start as a fun parody, like a one-time thing, but when we started posting about it, people were obsessed with it and were like, “This is ridiculous and hilarious,” so it quickly became pretty apparent that it would have to be more than just a one-time thing.

We recently wrapped writing the first whole arc of Good Boy, which is what’s in the Kickstarter campaign—the first issue—but the whole series comes out this fall. We just started writing the second volume of it, which is where we part from the John Wick-ness part of the whole thing and start going into our own story. We just finished the second book and are working on the third. So that and Warcorns are what we are focused on right now.

Elise: For those who may not be familiar with it, Warcorns is an action-comedy comic series about “combat unicorns for hire,” who carry out certain military missions for the government, particularly in the supernatural department. Can you tell us a little about the background of the series and how many issues are in it so far?

Garrett: Warcorns started as a one-shot story two years ago, and then we just put out a four-issue miniseries that just wrapped up. And then the last one-shot just came out, Birthday Bash, which is kind of like Revenge of the Body Snatchers. It’s this scary princess birthday party that they get called to because there’s been an alien sighting of this terrifying being that’s not supposed to be on Earth. They show up and they’re like, “There’s nothing here. It’s just a kid’s birthday party.” And they find out that it’s aliens posing as kids—like psychotic aliens. So it becomes this gut-fight at a kids’ birthday party, where there’s these crazy aliens stabbing them [the Warcorns] with fairy wands and trying to shed their skin off and stuff. It’s hilarious.

Elise: You had a motion comic with audio for Warcorns, too, right?

Garrett: Yeah, we call it a “MIXperience.” Back in like the 70s and 80s they did this thing called Power Records, where you would buy a Marvel or DC comic book and it would be this 45 album and you’d put it on and it would be like “Captain America comes in and saves the day!” And it would be this read-along-type thing, and I thought it would be so cool if we recreated that sort of vibe but obviously for modern times. So, we did an audio performance of the first book of Warcorns and cast it with professional voice actors. You can go now and buy the first issue, and it comes with a little sticker with a QR code that you can scan, and then the audio file launches on your phone. It’s awesome. I love it.

Elise: Can you talk a little about Franklin and Ghost and how it relates to Warcorns?

Garrett: Yeah, so Franklin and Ghost is the overarching universe that follows 4328 and 287, which are these symbiotes from this mining planet where nobody does anything but like breaks rocks all day, and they’re like, “Man this place sucks—we gotta get out of here and see the universe. There’s got to be more than this.” So they steal this space ship and escape, but neither of them can fly, so they crash immediately.

But because they’re symbiotes, they need hosts to survive on our planet, so when they crash here, one of them crashes in the forest and embodies a fox who is being hunted by these crazy hillbillies in North Carolina. The other one lands in a graveyard on the grave of a guy named John Pewter, and when Franklin shows up he’s like, “Check this out, I’m a fox! This is rad!” And he’s like, “And you are . . . John

So they are basically looking for a good time to see more of the universe, but they don’t realize that leaving their planet sort of set motion to a chain of events that could like destroy the galaxy. Because no one is supposed to leave their planet because they’re all secretly slaves, but they don’t know it. They all have these memory implants in their heads, so they all think they’re on this normal planet. But when they leave, the people who run the planets send out this fleet of these retrieval robots to hunt them down.

As they’re about to get their asses kicked in the first issue by these robots, this girl shows up—Delilah—who has this weird tie to their past that they don’t know about. So she shows up to face them and says “You guys don’t know what you’ve done by leaving. This is crazy. You guys are idiots. Now I have to fix this.” And it starts this massive adventure where they have to make it back to their planet and take down the corporation that runs it. It’s just like this space romp—a lot of people compare it to like Guardians of the Galaxy or Rick and Morty. Just very sci-fi inappropriate comedy.

When we did that series, I did four volumes of that because I wrote those books in really large formats, so they are all like 50-plus pages. So when we got done with it, I was like “I want to do something else crazy that’s nothing like this,” and I wrote the first Warcorns one-shot. It was supposed to be a one-time thing—a way to make fun of my old military buddies. Because I was like, “Oh, I’m going to write this thing and it’s going to be about how toxic and stupid military culture is, and I’m going to make all of them like crazy unicorns and they’re all going to hate it and it’s going to be awesome,” and then they all loved it and it back-fired on me. They all thought it was the most amazing thing ever.

I got so many messages, even angry messages, wanting me to continue the series. So, the publisher came to me and said, “You gotta make more Warcorns. We have to have more.”

So, they encounter Franklin and Ghost in that first one, and that’s the tie to their universe. And then in a future issue, the Warcorns go back in the past, and they are hunting Delilah, which reminds the readers that this is in the same universe.

Elise: Well, thanks so much for talking to us about some of your projects! I’m looking forward to reading Franklin and Ghost, more Warcorns, and Good Boy when it’s released.

A big thanks to Garrett for talking with us about some of his recent and upcoming projects!

For those interested in experiencing the unique “MIXperience” of Warcorns: Combat Unicorns for Hire, featuring voice actors such as David Mantraga, Sean Schemmel, Josh Grelle, Monica Rial, and Chris Jai Alex, you can check it out here and purchase the whole experience for yourself. And don’t forget to check out his Kickstarter for Good Boy before it wraps up this Thursday! If you are interested in reading Franklin and Ghost, you can check it out on Source Point’s website here, and you can stay up-to-date on the series and its future animated series on the series’ Facebook page here.

If you want to follow Garrett Gunn on social media, you can check him out both on IG and Twitter at @somewriterguy.

We are excited about all the work Gunn has put out there so far and look forward to the content he has coming out next!