Growing Up is Hard When You Are Part of a Legacy. – MARY Reviewed

Growing up is hard to do, especially with so many choices and so much opposition going around you that free will is seemingly ignored as you are told to conform. Follow this path, not that one, be this – not that. Most of those early years are spent by others telling you who you are to become and what to become. For our lead, Mary, it was far worse as a rigid future predetermined fate had been picked for her, as she was to carry on a legacy to become a famed writer just like her namesake MARY SHELLEY. Yes, that MARY, talk about Monstrous shoes to fill.

Imagine the stress of being a teenager, and oh yeah, now you have to write something profound because, you know it’s in your blood, now off to it. This is far from ok with our lead Mary, who feels trapped by her family, which is made up of all famous female writers just like the namesake who started the family legacy she now faces. Little does Mary know there are two legacies at play. 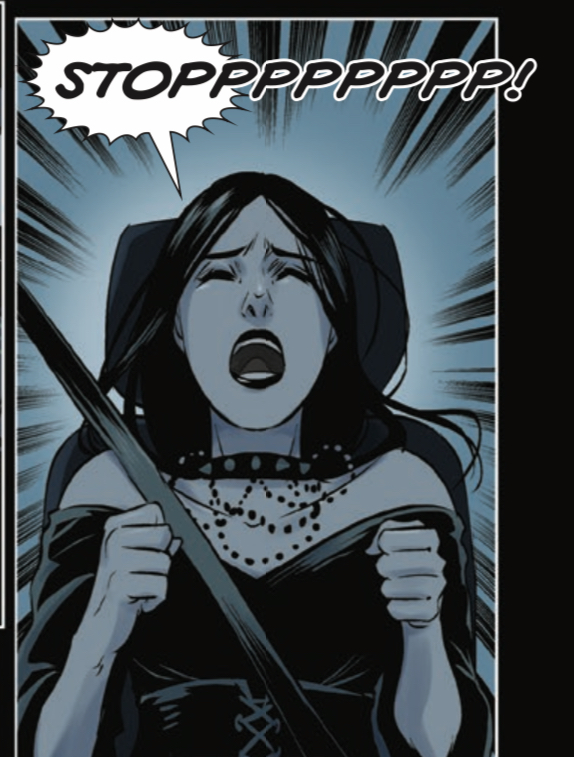 Now, I should stress when I was asked to review this, I was doing so upon request of Geek Insider. At first glance, I would have never chosen this book on my own. Full disclose, I am not a big monster or horror guy. The right story can draw me in but it isn’t something that calls to my fandom. So I went into this looking for the aspects of quality of the comic and whether it was entertaining with a good story. I did not expect to experience what I did reading this story…

Like many stories experience, the Dreaded need for the origins to set our story up, meaning a slow-paced start, moving the players into place and all that, this story found a way to do so with grace and made it feel seamless. Soon I went from reviewing to enjoying; from simply trying to understand to asking questions and reviewing all panels for clues as my interests were peaked. The writer does not tip their hat too early but guides the story to allow for foreshadowing that keeps you turning the pages, getting drawn further into the story.

We are introduced into a world of angst vs rebellion, a place in time where preordained future collides with an opportunity to do truly remarkable things. The main character Mary leaps off the page as someone you begin to root for as she becomes an empowered character now chasing her own path. By the end you will find yourself firmly on team Mary and be entered into a dynamic world you would have never expected to encounter on page one. With a cast of characters that sets the stage for total immersion into this story.

If you’ve noticed, I danced around giving you details because I believe you can, and should, go into this story knowing as little as you can. The writer has set you up for an adventure that I dare not ruin by any mention of secrets revealed within the pages of MARY. I will only say the storytelling is done in a way to invite all readers and tell a compelling story that does not lean into preconceived notions, but establishes new lore.

The art is Dark and realistic and fits the story as the perfect outfit for it to wear and invites you into the world of the Shelley’s. With a fantastic story that will leave you wanting more, I was floored just how much I got into it. This comic book is a shining example of how great stories that do not fit a narrative of what you expect comics to be, capes and tights, can expand your ability to appreciate the power of stories that can be told within the pages of comics.

Well done to the entire team behind MARY. – Mr. AnderSiN

‘MARY: The Adventures of Mary Shelley’s Great-Great-Great-Great-Great-Granddaughter’ is available for pre-order on Amazon and will be released on October 6, 2020 in paperback. Author Brea Grant will be on Geek Speak & Indie Volt Radio on September 28, 2020! Be sure to subscribe on YouTube.

Mr. AnderSIN is known as The Indee Advocating Devil. A creator and voice in the independent comic book world, his credits include Barbara Unleashed and award-winning all-ages book, CatDad and SuperMom. He is the engine behind Comic Book Advocates.

Fantasy or Reality?: Welcome to the World of...