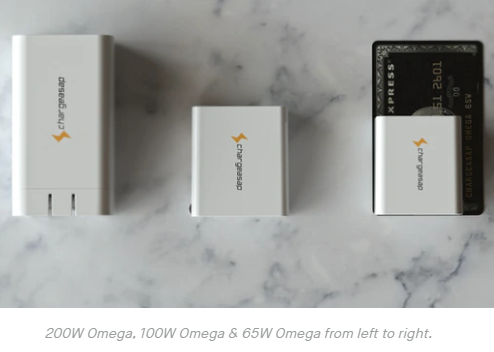 As we first reported almost 2 weeks ago, Chargeasap’s Kickstarter campaign has ROCKETED beyond expectations, and now you can benefit from it with a new stretch goal.

Sydney, 25 SEPTEMBER 2020: Sydney based consumer electronics brand, Chargeasap, known for its incredibly successful crowdfunding campaigns including Flash Graphene Powerbank, Infinity Magnetic cables and X-Connect cables is pleased to announce the availability of a new, even smaller 65W GaN charger as a stretch goal on its current Kickstarter campaign. Following the huge success of its 200W and 100W Omega GaN charger campaign to date with over $1 million raised, the world’s smallest ever GaN charger, the 65W Omega, will be available for just $33. The campaign ends on the 10th October with shipping expected to start in January 2020.

With dimensions of only 46mm x 42mm x 26mm and a weight of just 85g, the 65W Omega is 41% smaller than its closest competitor. The device is less than half the size of a standard credit card in height and width, allowing it to be easily slipped into a pocket or bag for daily use.

Chargeasap have partnered with Navitas Semiconductor Inc, the world’s first and only GaN Power IC company, founded in 2014 with a combined 200 years of team experience in materials, devices, applications, systems and marketing. The Omega chargers utilise the industry-leading Navitas GaNFast NV6127 Power IC which miniaturise silicon components found in traditional chargers. Gallium Nitride (GaN) is a semiconductor material that replaces traditional silicon-based power adapters allowing higher efficiency, less heat and the ability to handle a higher current. GaN IC’s are over 10 times smaller than traditional IC’s, a major advancement in the electronics field.

The Omega Charger is proud to be a pioneer in being the world’s first 2nd generation GaN Charger solving issues found commonly in 1st generation GaN chargers including overheating and the lack of accurate intelligent power distribution.

With the number of electrical devices people currently use on the go rising, travel space is crucial as consumers demand smaller, more portable gadgets and ways of keeping them charged for the “working on the go” culture.

By incorporating only industry leading components Chargeasap have ensured that all Omega chargers deliver superior performance in a pocket-sized charger. The dense circuit board is surrounded by high-density thin heat sinks to aid in heat dissipation and an industry-first graphene ribbon sheet that is strategically wrapped around the major charger components to further aid in cooling. The charger is then wrapped in a minimalist fire-resistant polycarbonate enclosure to complete the efficient design.

The Omega 65W supports 100V – 240V worldwide universal voltage but unlike the 100W and 200W models, it does not come with any travel adapters included as it is compatible with the 100W and 200W Omega adapters. Additional adapters are available as add-ons for $2.50 per adapter which allow the device to be used it in 200+ countries worldwide.

The Chargeasap Omega 65W GaN charger is available now on Kickstarter as a stretch goal for just $33.